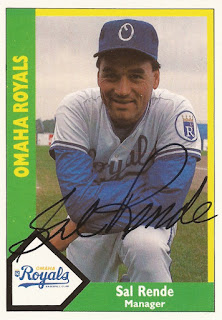 ROCHESTER, NY - Sal Rende is nearing 40 years in baseball, time spent as a player, coach, manager and coordinator. But his career might just has well have been counted in days, rather than years.

That's because after being drafted by the Indians in the 28th round of the 1977 draft, Rende recalled he and other players on his short-season Batavia team being told they would have five games in which to prove themselves.

If he didn't play well, he recalled recently to The Greatest 21 Days, that could be it.

"Fortunately," Rende recalled, "I did well. If I had a poor five games, I wouldn't be sitting here right now."

Rende performed well enough in those first five games to continue playing that year and for the next six seasons. While he never did well enough to get a call to the majors, he did do well enough to earn his first managerial job in the low minors in 1984 at the age of 28.

In the years since, Rende has managed from short-season on up to AAA. He's also served as a hitting coach at AA and AAA, and as a roving coordinator.

He's spent that time relating to players from all those levels. Figuruing out the best way to do that for each player is the challenge, he said.
"That's the hard part of coaching," Rende said, "trying to understand what each guy's about, trying to figure out what drives them, what you can do to push the right buttons for them to get them focused in the right situation and in the right direction.

"You try to make them realize that alls they can do is control their performance and not anything else that happens."

For 2015, Rende is serving as hitting coach for the Phillies at AAA Lehigh Valley. He spoke to The Greatest 21 Days in July in the visitor's dugout at Rochester's Frontier Field as his IronPigs prepared to take on the Rochester Red Wings.

He covered his career from his first time playing the game as a youth outside Chicago, on to his time as a player in the pros and then his lengthy career as a manager and coach. He also spoke of his long-time connection to future baseball executive and GM John Boles. Boles was Rende's coach in college.

Rende grew up in Blue Island, Ill., south of Chicago, graduating from Blue Island High School. Rende recalled spending his days as a youth at the ballpark.

"When it was not raining or snowing, we were outside playing," Rende said. "Baseball was the one that you could do at the park. We lived close to the park and that's all we did, spent all day at the ballpark, went home and ate lunch, ate dinner, and went back to the ballpark."

He went on from Blue Island High to find his way to St. Xavier University in Orland Park, Ill.

It was maybe sometime in college that he thought he might have the chance to turn pro, he recalled, but he never knew for sure. Even after getting signed by the Indians, he wasn't sure he could stick, he recalled. Everyone there was an All-State, All-American player.

When the Indians came calling, Rende recalled being a little surprised. That was mainly because St. Xavier was a small NAIA school with limited history. They'd had a second-round pick the year before, but it was still a little bit of a shock, Rende said.

Rende said the reason why he was signed was probably more due to his college coach John Boles than anything, as a favor to Boles.

"My college coach John Boles probably had the biggest impact on me," Rende said, "just because I had him for three years of college and I knew him for a long time."

Boles, as it turned out, would go one from St. Xavier to join the White Sox as a minor league manager and later join the Royals and the Marlins. Rende's early managerial career mirrored Boles'. It was even Boles who got Rende to make the move from playing to managing.

With the Indians, though, everything hinged on those first few games. Rende was a first baseman and the club had three of those.

"I didn't think anything of it," Rende said. "I just went out and played and fortunately did well and was able to keep a uniform."

He also recalled ending up being the MVP of the league. He hit .356, with 17 home runs over his 63 games with Batavia.
Even with that early success, Rende said he not sure he ever really proved he belonged. He recalled going on to AA Chattanooga in 1978 and being an all-star. He then made AAA Tacoma for half of 1979. But he never made Cleveland.

"I did OK, but then, like a lot of guys, I got to AAA and you get stuck behind guys, big league players and you don't really have a spot to go to and you just kind of plug along to see what you can do."

In the moment, though, he recalled having no thoughts of the majors. He was playing.

"I went to big league spring training, but I still didn't think anything about it other than 'I'm playing baseball and I'm gonna play and whatever happens, happens,'" Rende said.

Rende continued on as a player through 1983. He split time in 1980 between Chattanooga and Tacoma. He then spent the rest of his time at AA. He played 1981 and 1982 at Chattanooga and then 63 final games at AA Buffalo for the Indians in 1983.

Then Rende's old college coach Boles came back into the picture. Boles had been a manager in the White Sox system for three years. In 1983, he managed at single-A Appleton.

It was Boles who called, asking Rende if he was interested in managing. Boles moved up for 1984 to AA Glens Falls and the White Sox needed a manager at Appleton. Was Rende interested?

Rende thought about it. He and his wife were expecting their first child. It was also Rende's free agent year. His thought was there might be more security in managing. "So," Rende said, "That's what I did in 1984." (Part 2)