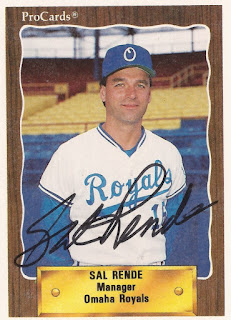 Sal Rende's Omaha Royals infielders asked for a break. Rende offered it, just as soon as the team had a 20-game division lead.

This was summer 1990 and Rende was Omaha's manager. Teams sometimes skipped outfield practice, but never infield.

"I told them jokingly that when we get a 20-game lead, we'll do it," Rende recalled recently to The Greatest 21 Days.

By the time the team concluded an early-August road trip, that 20-game lead was in-hand and Rende found himself hitting balls to the outfield. "The infielders were loving it," Rende said.

Rende's Omaha Royals team went on to take that large lead on to the 1990 AAA championship. It was his seventh season as a minor league manager. He also wasn't even 35.

Rende's managerial career started in 1984, after his playing career ended short of the majors. His first assignment was single-A Appleton in the Midwest League.

Rende recalled his first few years managing, he was barely older than his players.

"My one thought was if there was any way you could have your young players manage for three or four games, it would do them a world of good," Rende said, "because in three or four games you're going to see everything you do as a manager.
Not necessarily on the field stuff," Rende added, "but off the field, trying to get through a day with players and understanding what they're going through. So it was a bit different being that young and starting as a manager, rather than a coach."

Rende has since moved to coaching, spending much of the last 18 seasons as a hitting coach in the minors. Since 2004, he's served as hitting coach at AAA with the Phillies. He's continuing that at Lehigh Valley in 2015.

He spoke to The Greatest 21 Days in July in the visitor's dugout at Rochester's Frontier Field as his IronPigs prepared to take on the Rochester Red Wings.

Rende's first two seasons as a manager were spent heading up the Appleton Foxes - his first year there his team won the league championship. He moved to the Mariners system for two seasons, managing one at AA Chattanooga. He then arrived with the Royals and AA Memphis in 1988.

He arrived at AAA Omaha in 1989. He's then spent much of his career since at the AAA level.

His 1990 team, the one that won the AAA championship and earned a day of only outfield practice, Rende recalled that one as probably having some of his best memories managing.

It was the best, he said, because of the group of guys he had. There were no superstars on that team, but they won the title. Russ Morman, he recalled, was the glue of the team.

"He kind of motivated everybody," Rende recalled. "He was the leader in the clubhouse."
Rende had also had Morman previously at Appleton. In fact, over their careers, Rende had Morman on his team for seven seasons, six of those at AAA.

"He's probably the one player that I would say I impacted the most," Rende said, noting Morman also pursued a career as a minor league manager and coach after his playing days were done. (Read the 2012 Greatest 21 Days interview with Morman)

Regarding the rest of that 1990 team, Rende rattled off the names of several of the other players, including Tim Spehr, Paul Zuvella, Bobby Meacham, Jay Baller and Mel Stottlemyre, Jr.

"It was a unique blend of veterans and a couple young guys mixed in," Rende said. "The thing about it is every day, every day was a game and they prepared and they played to win and they knew how to play to win."

The difference between managing and coaching players at AAA, versus the lower levels, Rende said, is the older guys are more established. Their maturity level is usually better, too, he said.

"Sometimes it's harder, sometimes it's easier," Rende said of coaching at AAA. "In A-ball it's more of a coach-player relationship, I think. At the AAA level, it's more a man-to-man situation. But it is also tougher because you have the guys who think they should be in the big leagues sometimes and it blocks them from doing the things they need to do."

Rende's task is to figure out how best to approach each player to get them to the proper things. "Every guy is a little different," Rende said.
Rende spent seven seasons as a player himself, two of those with time at AAA. He hit three home runs in a short-season game. He also had 10-straight hits at AA. But that time is now more than 30 years old, so there isn't much that carries over, he said. But there is one thing that never fades, Rende said. That's competitiveness.

"You never lose your competitiveness," Rende said. "That's the one thing about the daily grind of baseball because as a baseball player, you're geared up for that daily competition. It sometimes looks like a routine, but man-oh-man, when that first pitch is thrown, it's game on and you're kind of looking for that action."

Rende has also tried time as a roving coordinator. From 2008 to 2010, he was roving minor league hitting coordinator for the Phillies. He's been back at AAA since 2011.

Being a coordinator makes it easier to be home more. He got to watch his son play college golf and be home with his family more. But, as far as the time spent in the game, being a coach is better than being a coordinator, he said.

"Being with the guys daily is more fun to me," Rende said, "because you get more personal with them and you go through the ups and downs and the grind with them every day."

With all his time at AAA, is Rende looking for action in the majors? He's spent at least 19 seasons patrolling AAA dugouts. Is the majors the goal?

He's thought about it in the past. Maybe there'd be a good situation. But he's also happy doing what he's doing.

"We're doing what we love to do," Rende said. "And at this stage in life, there's not much else you can do you've been doing this for so long. So you're kind of stuck, but for me it's a good stuck because I really enjoy it."