Features on each member of the 1990 Colorado Springs Sky Sox, AAA affiliate of the Cleveland Indians. Players are as included in that year's team set. Click on the player's name to read more. 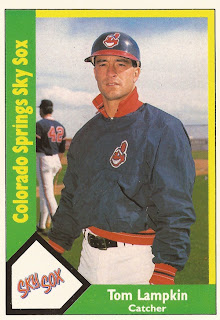 1 - Rick Adair, Learning A Lot
Rick Adair knew the importance of holding runners close. He took those lessons to a job as a coach.
2 - Beau Allred, Got It
Beau Allred robbed Matt Nokes of a home run and played in three major league seasons.
3 - Buddy Bell, Very Lucky Buddy Bell played in 18 major league seasons. He managed in nine.
4 - Juan Castillo, Ready Whenever
Juan Castillo tried to stay ready whenever the Brewers needed him.
5 - Alan Cockrell, Easy Decision
Alan Cockrell showed his love for baseball by playing for 13 seasons, and having a long coaching career.
6 - Jeff Edwards, Back In Shape
Jeff Edwards played seven seasons in the minors. He made AAA but never the bigs. 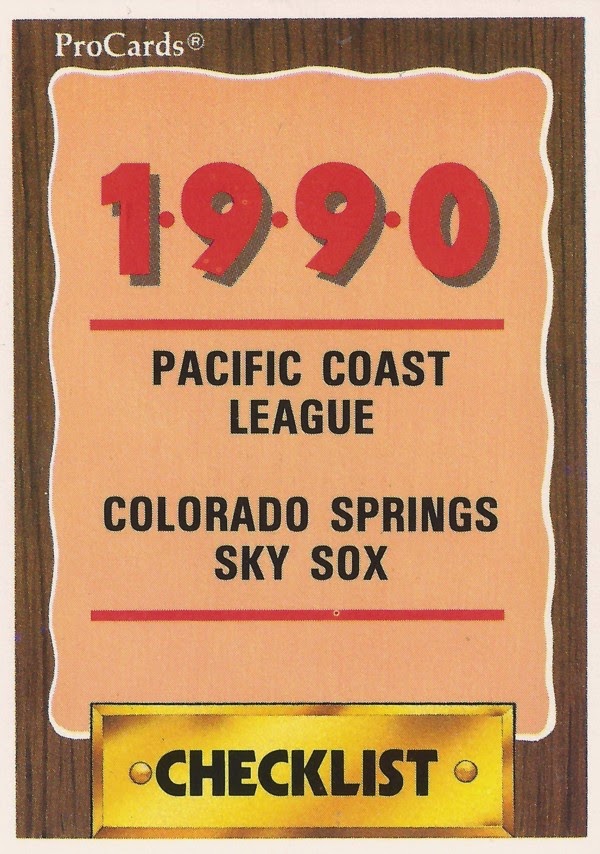 7 - Ty Gainey, One Spring
Ty Gainey impressed Astros brass in spring 1985, but not enough to be a regular.
8 - Jeff Kaiser, Shattered Bat
Jeff Kaiser got his first major league save after first getting through Ken Griffey Jr.
9 - Tom Lampkin, Ultimately Played
Tom Lampkin was fine with playing daily at AAA, as long as he ultimately played in the majors.
10 - Ever Magallanes, Highest Level
Will Magallanes was once a White Sox prospect. He later had ugly incident with a bat.
11 - Tom Magrann, Catching Opportunities
Tom Magrann threw out two runners in one inning at AA, made majors for nine games with the Indians.
12 - Jeff Manto, Streak Hitter
Jeff Manto was a streak hitter in 1995, hit two home runs each on consecutive nights.
13 - Greg McMichael, Worked Out
Greg McMichael's career was threatened by injury before his major league debut. He played in eight major league seasons.
14 - Luis Medina, Really Fun
Luis Medina hit a homer in his native Southern California. It ended up being the last of his 10 in the majors.
15 - Bobby Molinaro: All Bobby Molinaro asked was for his players to stay on top of the game mentally while they were between the white lines.
16 - Troy Neel, Another Name
Troy Neel went by many names in his career, among the names: "Deadbeat Dad."
17 - Doug Robertson, Be Realistic
Doug Robertson played seven seasons, never made the majors. He then returned for spring 1995.
18 - Jeff Shaw, Changed Gears
Jeff Shaw changed gears late in his career to become a closer, focus on his family.
19 - Joe Skalski, Quick Ending
Joe Skalski's brief two-game major league career with the Indians ended on an ejection.
20 - Steve Springer, Rather Play
Steve Springer spent 11 seasons at AAA, much of that at Tidewater. He made the majors for eight games.
21 - Dwight Taylor, Good Jump
Dwight Taylor knew it was important to get a good jump. He made the jump to the majors for four games.
22 - Efrain Valdez, Breaking Pitch
Efrain Valdez had a choice on his first pitch back. He threw a fastball and then gave up a home run.
23 - Mike C. Walker, Two Dreams
Mike Walker got his first major league win the same night he almost got his first major league complete game shutout.
24 - Colby Ward, Good Day
Colby Ward's family saw his first major league win for the Indians. He didn't get another. He got into 22 games in relief in 1990.
25 - Turner Ward, Played Hard
Turner Ward only knew how to play all-out. He did so in 12 major league seasons.
26 - Casey Webster, Couldn't Replicate
Casey Webster didn't feel his good minor league season was a fluke. He made AAA, but never made the majors.
27 - Jeff Wetherby, Roller Coaster
Jeff Weatherby played in 52 games with the Braves in 1989. He couldn't get back.
28 - Carl Willis, Track Record
Carl Willis became a major league pitching coach after nine seasons in the majors as pitcher.
Posted by Steve78 at 5:30 AM