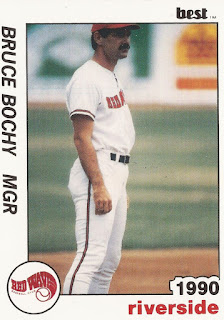 Early on in his new career as a manager, Bruce Bochy received praise.

He'd won the league title in his managerial debut for the Padres at short-season Spokane in 1989 and he then took on high-A Riverside in 1990.

"He is highly respected," Padre director of player development Tom Romenesko told The Los Angeles Times that July. "He's got a chance to really be an outstanding asset to the Padres."

Bochy has since become one of the most respected managers in baseball. He arrived in the majors as a manager with the Padres in 1995 and he hasn't left the majors since.

He managed the Padres to the 1998 World Series. He then moved to the Giants, soon taking San Francisco to three more World Series, managing the Giants to wins in all three.

Bochy's long career in baseball began as a player, taken by the Astros in the first round of the 1975 June secondary draft out of Florida State University.

Bochy made AA Columbus in 1976 then jumped to the majors with Houston in July 1978.

He arrived with the Padres for 1983, playing with them parts of each season through 1987. In 1984, he even got to the plate in Game 5 of the World Series. He singled to left.

Bochy started his managerial career in 1989 at Spokane, winning league Manager of the Year honors. He moved to Riverside in 1990, AA Wichita in 1992. In 1993, he returned to the majors as third base coach with the Padres.

The Padres then named Bochy manager for 1995. Padres GM Randy Smith cited continuity and Bochy's ability to handle the club's pitching staff in hiring him, according to The Associated Press.

"In my mind," Smith told The AP, "he's the best managerial prospect in the game."

Bochy continued with the Padres for a decade, taking the club to the World Series in his fourth season. San Diego lost that year to the Yankees.

Bochy then moved to the Giants for 2007. Bochy again took his club to the World Series in his fourth season, beating the Rangers in 2010 for the title. Bochy's Giants then won again, beating the Tigers in 2012 and the Royals in 2014.

The Giants won their third title in five seasons in 2014 after Bochy used top postseason hurler Madison Bumgarner in relief in Game 7 and stuck with him until the end.

"I was staying away from him every inning because I was hoping he wouldn't go, 'I'm starting to get a little tired,' " Bochy told reporters afterward. "Because there's no way I would have taken him out unless he would have told me that. We just got on his horse and rode it."

Bochy continues with the Giants in 2017.

In April 2016, Giants executive vice president of baseball operations Brian Sabean tried to explain Bochy's success, telling MLB.com that Bochy has the ability to slow the game down.

"He's just got that ice-water-in-his-veins approach that comes from him being prepared," Sabean told MLB.com. "The number of years he's managed and the situations and scenarios that are done in real time. He knows his players' capabilities and how or when to push their buttons probably as good or better than everybody I've been around."
1990 Minor League Tally
Players/Coaches Featured: 2,525
Made the Majors:1,014-40.2%-X
Never Made Majors:1,511-59.8%
5+ Seasons in the Majors: 421-X
10+ Seasons in the Minors:259
Posted by Steve78 at 3:00 PM