Features on each member of the 1990 Gastonia Rangers, single-A affiliate of the Texas Rangers. Players featured are as included in that year's team sets. 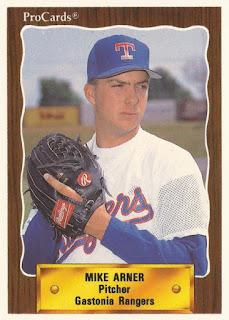 1 - Mike Arner, Hitting Spots
Mike Arner started strong in a July 1990 start at high-A. He played at AAA, but not in the majors.
2 - Eric Bickhardt, His Makeup
The Rangers liked Eric Bickhardt's makeup. He played four seasons as a pro.
3 - Travis Buckley, His Love
Travis Buckley got one last shot at playing. Got him into his 10th and final pro season. He never made the bigs.
4 - Mike Burton, Transferred Skills
Mike Burton used his baseball skills in seven seasons, then transferred them to golf.
5 - Jim Clinton, Kept Him
Jim Clinton learned to change positions. It got him to seven seasons, but not the bigs.
6 - Joey Eischen, Unusual Approach
Joey Eischen had an unusual approach. It got him into 10 major league seasons.
7 - Troy Eklund, Thought Double
Troy Eklund went from a brief career as a pro player to a career in broadcasting.
8 - Brian Evans, Into Perspective 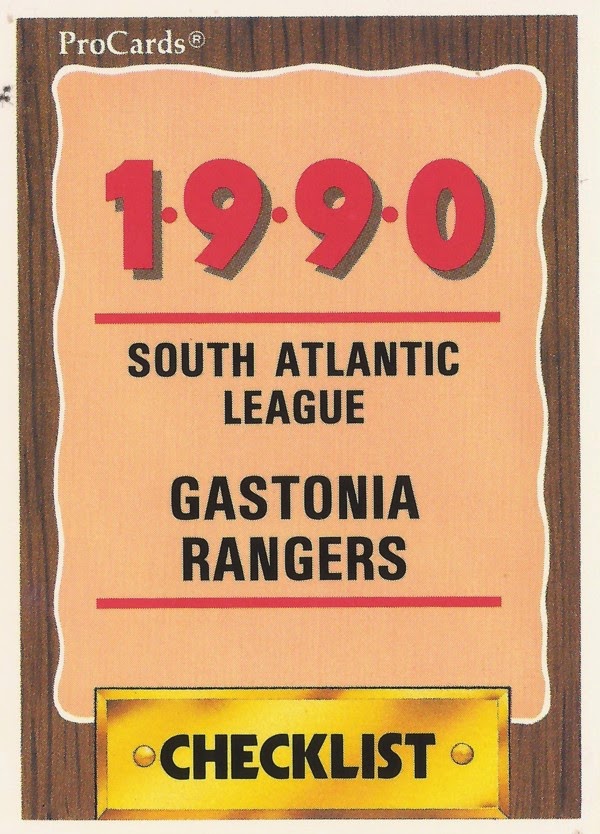 Brian Evans pitched well, but he only pitched in three professional seasons.
9 - Jay Franklin, Deserved That
Jay Franklin has gone from a brief playing career to a long career as an agent.
10 - Orlando Gomez, Stayed Young
Orlando Gomez has stayed young for 50 years.
11 - John Graves, Save Earned
John Graves earned an April 1990 save. Pitched just two seasons as a pro.
12 - Perry Hill, Infield Guru
Grew into an infield guru as major league coach
13 - Jonathan Hurst, In Heaven
Jonathan Hurst stepped on his high school baseball field and was in heaven. Made bigs in two seasons.
14 - Joe Lewis, Cut Down
Joe Lewis cut a runner down at second in 1989. He played three seasons as a pro.
15 - Randy Marshall, Key Hit
Randy Marshall got the key hit in a 1991 high-A game. He played three seasons as a pro
16 - Buddy Micheu, His Officers
Buddy Micheu went from baseball to a career in law enforcement in New Orleans.
17 - Timmie Morrow, Slow Progress
Timmie Morrow helped the Port Charlotte Rangers to a 1992 win, but he never could help himself to the bigs.
18 - Craig Newkirk, Quiet Style
Craig Newkirk tried to lead by his actions. He played four seasons as a pro.
19 - Jose Oliva, Show People
Jose Oliva wanted to show he could play in the bigs. He played there in two seasons.
20 - Kenny Powell, One Run
Kenny Powell played five seasons as a pro. Since gone into another career: acting.
21 - Carl Randle, One Night
Carl Randle threw a no-hitter at Gastonia in 1990. He played five seasons, never made AA.
22 - Brian Romero, Felt Better
Brian Romero felt more relaxed with the lead. He played seven seasons, never made AAA.
23 - Ronaldo Romero, Lost Friend
Not long after his Gastonia photo was taken, Ronaldo Romero was gone. He was 19.
24 - Ramon Santiago, More Equipment
Ramon Santiago kept track of equipment. He later changed careers.
25 - Tony Scruggs, Same Feeling
Tony Scruggs' baseball fate was different than his old teammates Juan and Sammy.
26 - Brian Steiner, Hard Worker
Brian Steiner was a hard worker but he never made AA.
27 - Tom Tisdale, His Work
Tom Tisdale received recognition for his training work in 2005.
28 - Joey Wardlow, Was Hungry
Joey Wardlow helped his high school to a state championship. He played four seasons as a pro.
29 - Randy Whisler, Developed Them
Randy Whisler left pro baseball multiple times, only to return multiple times.
30 - Marvin White, School Career
Marvin White threw no-hitters in high school. Coached, but didn't play in the pros.
31 - Barry Winford, Crossed Paths
Barry Winford crossed paths with a Hall of Famer in spring training. He never made AA himself.
Posted by Steve78 at 1:00 PM