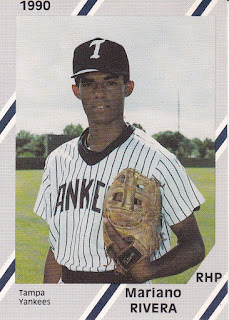 Rookie Yankee starter Mariano Rivera gave up nine hits in this June 1995 start. Two of those hits went for home runs, a two-run shot and a grand slam, according to The Hartford Courant.

Of the day's performance, Rivera's manager Buck Showalter explained what his young pitcher needed, according to The Courant.

"Young pitchers have to find a way to get out of tough situations," Showalter told The Courant. "He had good stuff, but that's not the total picture at the major league level. Good hitters will hit good stuff if you don't get pitches where you want them."

Rivera eventually found a way out (his cutter) of many tough situations in his career. Turned reliever later that year, Rivera skill at getting out of them eventually made him the first player to unanimously be elected to the Hall of Fame.

Along the way, he made 13 All-Star teams, helped seal Yankees playoff wins and earn five World Series rings. He also saved 652 regular season games, the all-time record, and earning him status as a baseball immortal.

Rivera's career began in 1990, signed by the Yankees as a free agent out of his native Panama.

Rivera started with the Yankees in the rookie Gulf Coast League. He showed his stuff early. He worked 52 innings and gave up a single earned run. He went 5-1 over 22 outings, one start. He saved one and, in his only start, threw a no-hitter.

Rivera moved to single-A Greensboro for 1991, then high-A Fort Lauderdale in 1992. He made AA Albany-Colonie and then AAA Columbus in 1994. He started 22 games between them and went 10-2.

He recorded his first five major league saves. He also helped the Yankees to the World Series title over the Braves. He gave up one earned run in four World Series outings.

Two years later, he and the Yankees were back. Rivera had also long since secured the Yankees' closer role. He went 6 for 6 in save opportunities that postseason. His legend was also just growing.

"Mariano makes us all just stand there with our mouths open," fellow reliever Mike Stanton told The Los Angeles Times after Rivera's Game 3 save. "It's one thing to be effective with one pitch--he dominates with it. The Lord blessed him with a 95-mph fastball and movement you're not supposed to have. The amazing thing is he's not trying to cut his fastball. That movement is natural."

Rivera saved another six-straight postseason games for the Yankees in 1999 and six in 2000. Each year ended in another title. He then saved five more in 2001 and blew one, in Game 7 of the World Series.

"I was trying to do my best, but I'm not perfect," Rivera told The Times after the loss to the Diamondbacks. "Everything was working today, I just didn't do it."

By the time he retired after the 2013 season, Rivera had amassed the most saves ever and a reputation as among the most feared pitchers in the history of the game.

After taking the all-time saves record in 2011, Rivera thanked others for helping him get there.

"I couldn't even dream about this," Rivera told fans in an on-field interview afterward, according to Reuters. "From what it was back home in Panama to now it's a tremendous journey. All I can say is thank God for my team mates, they give me the opportunity."

In January 2019, Rivera got his call to Cooperstown. First ballot. Unanimous.

He returned to Yankee Stadium that March to throw out one more pitch, the Yankees' ceremonial first pitch of 2019.