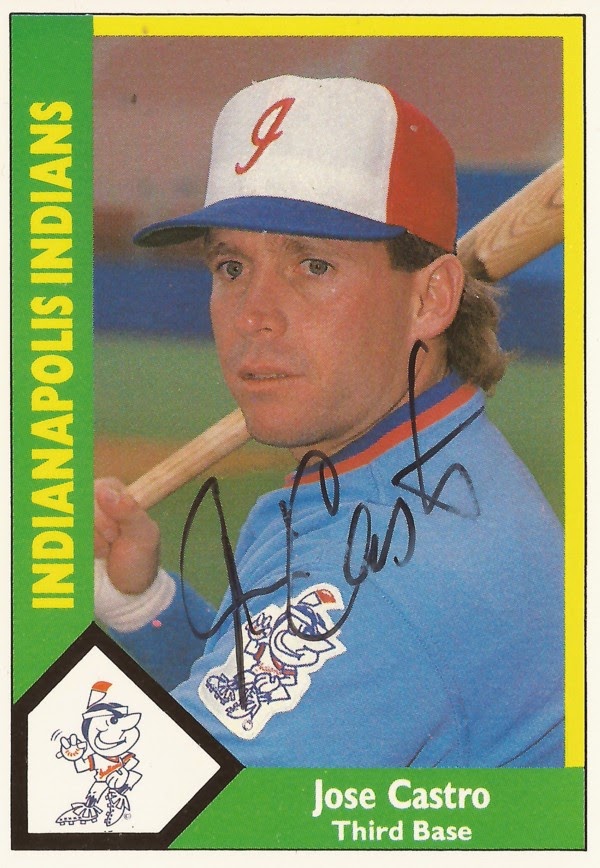 It was June 2008 and Jose Castro was summoned to Seattle. Changes were being made in the club's big league coaching staff and those changes soon led to Castro.

Soon, he was summoned in with an offer: Would Castro be interested in being the Mariners' interim hitting coach?

"I said absolutely," Castro recalled last month to The Greatest 21 Days. "I was there three-and-a-half to four months. That was a great experience working with these big league hitters."

Castro also got his first look at major league life after more than three decades in the game as both a player and a coach. He'd spent 14 of those years as a player, making AAA, but not the majors.

After all that time spent in the minors, what did he think about making it to the majors?
"It's the big leagues," Castro said. "Everything about it. It's the place where you want to be. It's just the max, the maximum, just everything about it."

"You've got to do it and go through it to really understand the big leagues," Castro said. "It's a great place to be."

Castro's time with Seattle ended with 2008's end. But Castro returned to the majors in 2014, with the Cubs. Castro helped players with hitting, going through reports on opposing pitches and helping with replay challenges all as the team's quality assurance coach.

Castro spoke with The Greatest 21 Days by phone on an off day in early September. He talked about his time growing up in Florida and learning the game after his family left Cuba.

He also talked about his time in the minors, turn to coaching and, finally, his arrival and work in the majors.

Castro spent his first years in Cuba, born in Havana in 1958. It was when he was 7, in 1965, that his family left the country for Florida. Castro recalled then that all they needed to leave was a boat.
The boat was provided by his uncle, who'd left in 1959 and set up a market. He'd saved some money, rented the craft and picked up Castro's family.

Castro remembered the weather not cooperating for the trip. Cuba to Key West can take as little as three hours by speed boat, Castro said. His family's trip in that sail boat took 27 hours, he recalled.

"We hit some really bad, rough seas," Csatro said, "so it took a while to get there."


Castro's family settled in Miami. He recalled it took him a few years to find baseball. He was 13 when he started playing, getting involved in the local leagues.

He got involved through a combination of playing in school and with friends. He grew up in a large apartment complex and he and friends would just throw baseballs around and just hit.

Castro recalled one of the parents coaching his local team spotted something in Castro.
"My dad had played some amateur baseball in Cuba, so he saw a little bit of that in me," Castro said.

Knowing the scouts were there, Castro tried to continue what he'd been doing.

"You just play and you really don't know where it's going to take you," Castro said. "Like every kid, you have a dream when you're doing something. It's great to dream and, when it happens, it's really nice to accomplish your goals."'

Castro's first goal was to play professionally. By the time draft day came, Castro had heard rumors that he'd go in different rounds. He eventually went in the 27th round to the Phillies.

"I had a couple of college offers," Castro said, "but I wanted to get into professional baseball and I did."

"You work so hard to do it and it happens," Castro said of getting drafted. "It's a great feeling."
Castro started with the Phillies at short-season Auburn in the New York-Penn League. He recalled having to learn the basics being away from home for the first time, from cooking to paying rent.

"You're doing a lot of different things, with not a lot of money, by the way," Castro said.

He earned a spot at AAA Oklahoma City for 1981, hitting .303 there in 122 games. With another good year, though, Castro didn't take the next jump to Philadelphia.

"I never repeated a level until I got to AAA," Castro said, "and then I spent 10 years there."

Castro eventually spent those 10 AAA seasons in five different organizations. Though he didn't make the majors, he did make the contacts he needed to start a coaching career that eventually did get him where he wanted to be, the majors. (Part 2)