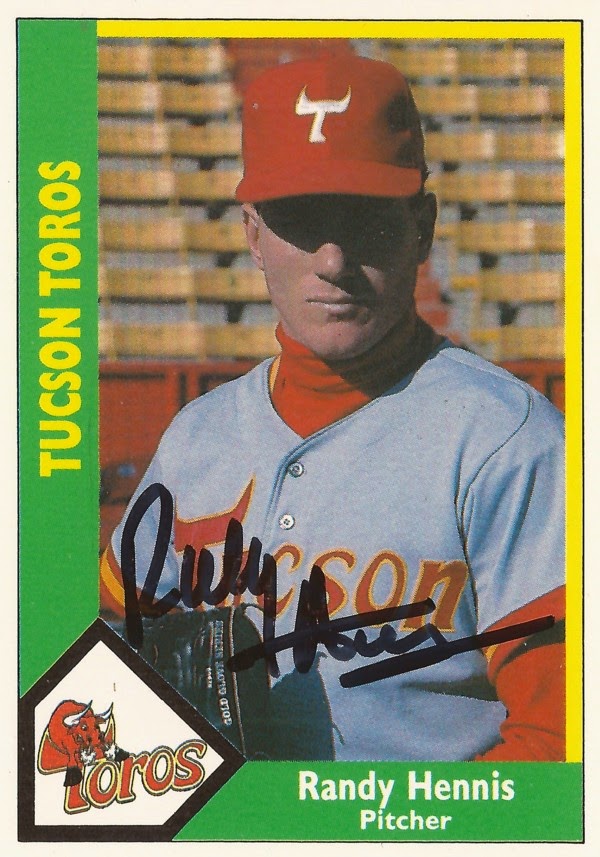 Randy Hennis remembers that call to the bullpen well. It was Houston manager Art Howe and he was calling for Hennis to get up and working.

Hennis was not only going into a game in relief, a rarity in his professional career, but this relief appearance was going to be his major league debut.

"I remember Art Howe calling my name to go get ready," Hennis recalled recently to The Greatest 21 Days. "That was the biggest jolt of adrenaline I've ever had in my life."

Once in the game, Hennis proceeded to use that adrenaline to work out of a jam and set down five men in a row.

He also proceeded to provide the basis for a stat line that on the surface showed success, but underneath gave a glimpse of what might have been.

In his three outings for the Astros that year, Hennis put in 9.2 total innings. He had nine full in before he gave up his first and only hit.
Hennis also never returned to the majors. A nagging shoulder injury suffered the next year ended his dreams of a longer big league career. That shoulder injury ended up freezing Hennis' major league stat line at just where it was: 9.2 innings, one hit given up and a 0.00 ERA.

Hennis spoke to The Greatest 21 Days by phone recently from his adopted home state of Florida.

He spoke of growing up in Southern California, choosing baseball over other sports simply because he seemed to be better at it. Helping him, he recalled, was his father.

Hennis told of the tough decision to turn down the Bombers for college baseball at UCLA, then finally turning pro after his junior year after being taken in the second round by the Astros.

As a pro, Hennis worked his way through the minors, before breaking through as a September call up in 1990. Hennis told of having that early success, then dealing with the injuries that came later and finally ended his playing days with that singularly distinctive major league stat line marking brief career in the bigs.
Hennis grew up in San Diego, picking up the game at the age of 9. Baseball, though, wasn't his first love, he recalled. His first love was basketball.

"I really wanted to be a basketball player," Hennis said. "I kind of just played baseball for fun, just because I was good at it."

Hennis was good enough at it, he recalled, that scouts started showing up at his games. That's when he started realizing he had a better future not in basketball, but in baseball.

Helping him develop his pitching skills, Hennis recalled, was his father, Neal. Hennis said he has to give a lot of credit to him.

"From a younger age, he knew and he could see that I had some talent and tried to instill in me a work ethic to try to get the most out of my ability," Hennis said.

Hennis started noticing the scouts during summer ball the year before his senior year at Patrick Henry High school in San Diego. They continued watching him during his senior year. In one game, Hennis' opponent was also being scouted. He recalled dozens of scouts at that game.

"It's kind of impressive seeing 30 to 40 scouts with radar guns behind home plate while you're pitching," Hennis said.

When draft day came, it was the Yankees who came calling. The Yankees selected the high schooler in the fourth round.

The selection had Hennis thinking hard about turning pro, he said. The Yankees were one of the four or five teams he wanted to play for one day. In the end, though, he went to college, signing with UCLA. If he got injured as a pro, he reasoned, he should have some college to fall back on.

At UCLA, Hennis played with several future major leaguers. He also helped his team make the regionals his sophomore and juniors.

Along the way, he recalled rattling off a string of five or six complete games in a row. He remembered pitching a complete game where his Bruins won 28-5.

"More than anything, I remember pitching against a lot of great players," Hennis said.

After his junior year, it was the Astros who came calling. Hennis did even better than after high school. This time, he was taken in the second round, the Astros' second pick of the 1987 draft. The Astros' first pick, Hennis noted, was Craig Biggio.
Hennis soon signed.

"It was what I had hoped for and what I had wanted," Hennis said, "so I was ready to go."

Hennis' first stop was in the short-season New York-Penn League, with Auburn. Hennis had never been to Upstate New York. "I was really anticipating it and looking forward to it," Hennis said.

"I learned a lot that first year about how I needed to be," Hennis added.

Hennis started an off-season training program and worked hard to make sure he didn't have another year like that, he recalled. "I busted my tail," he said.

Hennis also started working his way through the minors. He made single-A Osceola in 1988, then AA Columbus in 1989. In 1990, he made AAA Tucson. That September, he made Houston.