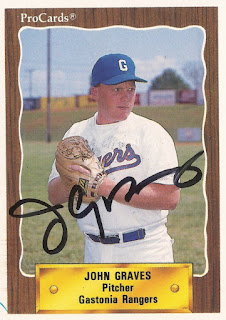 The Texas Rangers had taken the Oklahoma City University hurler in the 39th round of the draft. But he had eligibility left in college - and a degree to get.

"Do I go back for another year and pitch and maybe not get a chance," Graves recalled recently to The Greatest 21 Days of his thinking. "Or do I take this chance and try to make the best of what I can?"

"I've always believed that if it's your chance than that's the opportunity you get. I can't necessarily turn it down," Graves said.

Graves' chance ended up being brief. He played two seasons, making it as high as single-A Gastonia. But he did get his degree, one in chemistry. He's had a long career in that field since.

He's also recently gotten back into baseball - in a different role. He frequently serves as the pitch clock keeper at home games for the Oklahoma City Dodgers.
Graves spoke with The Greatest 21 Days recently by phone from his Oklahoma home. He covered his time growing up learning the game in California and Oklahoma and then his time as a pro.

Graves spent his early years in Southern California, before the family moved to Oklahoma when he was 10. His father Bill grew up in Oklahoma and that's where the family ended up.

He recalls starting to play at about the age of 7. His father simply asked if he want to go play and Graves said 'sure.'

Spending those early years near San Diego also meant lots of Padres games at the old Jack Murphy Stadium, Graves recalled, "so baseball was kind of always there."

Graves always seemed to pitch, though he played some infield in high school. He also frequently practiced with his dad, he recalled.

"When I was 8, 9, 10, my dad and I would get up in the mornings and go run a mile and then go to the elementary school probably a half mile away, we'd go down there and pitch for about 30 minutes," Graves recalled, "and then go home, take a shower and go to Winchell's to get donuts, then he'd take me to school. That was kind of our thing."
By the age of 10, his family had made it to Oklahoma. Graves recalled that move as probably the one that ultimately gave him his opportunity. If they'd stayed in California, he might not have gotten to play.

Graves recalled being an OK player as a kid. He always seemed to play on teams where the coaches overlooked him his first year. He didn't get that opportunity at first. Then in his second year he did well.

He recalled after not getting to play he'd get disheartened. His father would reassure him and sign him up to play when Graves wasn't she he wanted to.

"My dad always said that the cream always rises to the top," Graves recalled. "Things like that, when you don't play that one year or you don't play as much, or you're not the star, it makes you want it more a little bit."

In Oklahoma, Graves attended Chickasha High School in Chickasha. He played on varsity his freshman year, getting limited time. He then returned for his sophomore year and started striking guys out. He recalled leading the state over two years and coming in just behind the leader his senior year.

Graves looked for a scholarship out of high school. He went to junior college for a year and a half, now Crowder College in Missouri. Over his sophomore year winter break and looking for a change, he drove by Oklahoma City University and went in and talked to the coach.
They had a scholarship opening and Graves got it. Over that season and the next, scouts came by from time to time. Graves went to a tryout camp for the Rangers in Tulsa. He earned a follow-up trip to Arlington for a camp there.

"I just went out and pitched," Graves said of the tryout camps. "At that point, it is what it is. I've always believed that if they like you, they're going to take you. It doesn't matter where you pitch or play, they're going to find you."

He just went out there and showed them what he had.

At Oklahoma City University, he recalled pitching well enough to think that the pros could happen.  Then, that June, the pros called.

"Really, it was kind of a no-brainer," Graves said of choosing the pros, "because every kid wants to grow up and play baseball and play in the major leagues. That's what they want to do. So I just decided it was time to do it, even though I did have another year of eligibility left in college. 'Lets do it and see what you can make of it.'

"You make that decision and you don't look back."

Graves didn't look back. He also soon found himself playing in Butte, Mont., with the Rangers' rookie Pioneer League team the Copper Kings. (Go to Part 2)