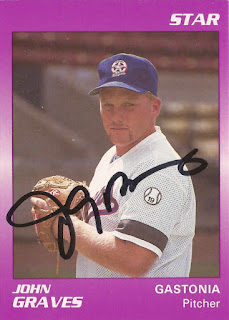 The difference, he recalled, could be one of his mood or just how he was pitching at the time.

"Most of the time, thinking back, if I worked slow, I was really working on something mechanically or something that was going on that I really needed to work on," Graves recalled recently to The Greatest 21 Days.

"But when I worked fast," Graves, who played two seasons as a pro, said, "it was because I was really in a rhythm."

Hitters, of course, then try to break up that rhythm by stepping out of the batters box, Graves noted.

Beginning in 2015, at least at AA and AAA, pitchers and hitters have both had to work fast. In Oklahoma City, that's been at least partly because of Graves.

When the minors instituted the 20-second pitch clock in 2015, Graves found himself with an offer any baseball fan would accept.
Having already worked as a scorekeeper on the side at Oklahoma City AAA games, Graves walked into an offer to help run the Oklahoma City pitch clock. He jumped at the chance.
"It's so different because baseball has always been a game that's not regulated by a clock," Graves said.

How about the job itself?

"You really have to pay attention," Graves said. "It really makes the game a little bit more interesting because you're really paying attention and it's not just a social event."

Graves' own run as a professional pitcher lasted those two seasons, both in the Rangers organization. He turned pro out of Oklahoma City University and played his first year in Butte, Mont., and his second at Gastonia, N.C.

He served largely as a reliever both years. He put up a 2.01 ERA his second campaign, making the league all-star team.
He then returned for spring 1991 and thought he did well. He even recalled thinking he'd made the cut when other players got called in one day to be released and he wasn't.

"I'm thinking, 'OK, I made it, I did OK.'" Graves recalled. "The next day I went through the workout - and they called me into the office. They said, 'Oh, we couldn't get to you yesterday.' I was like, 'OK, great, I worked out an extra day for no reason.'"

Maybe it was his non-traditional size - 5 feet, 10 and 210 pounds. Maybe he just didn't have the backer he needed. But, whatever the reason, his brief baseball career was over.

"It is what it is," Graves said. "I was a little shocked by it. But it's not shocking. You look at all the people that play and then don't come back.

"I always believed that if a team likes you and you're good enough to be there," Graves said later, "then they're probably going to take a chance on you."

He recalled being torn about trying out for other teams. In the end, he didn't. He decided to move on.
His chemistry degree in-hand, Graves returned home to Oklahoma and became an embryologist. He works in in vitro fertilization. Essentially, he helps make babies.
In addition to his pitch clock-running duties, he's also given baseball lessons from time to time, forgoing payment to pass on the gift he received.

Graves' son played baseball growing up. He coached his teams. His son's 23 now. He also has two daughters, age 10 and 7. They're interested in sports, just not softball. One plays soccer, the other plays volleyball. His son also has a son now, Graves' grandson.

He lives with his wife and daughters outside of Oklahoma City.

His advice to kids playing: "Play it as long as you can because it's not there forever."

"Keep playing," Graves said he tells people, "because if you're good, they're going to find you no matter where you're at."