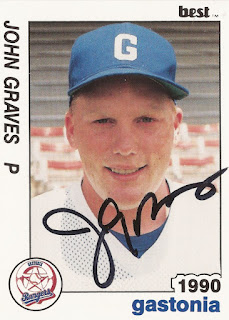 Drafted by the Texas Rangers in June 1989, John Graves soon found himself on a plane to Butte, Mont.

"The first few days it was nice weather," Graves recalled to The Greatest 21 Days. "You had to get used to the altitude, because you're a mile up."

Then came their first game, set for Pocatello, Idaho. It got snowed out, Graves recalled.

"You don't really see a whole lot of snow in the middle of June anywhere," the native Oklahoman said. "That was very interesting."

From that interesting start, Graves went on to play that season and the next as a reliever and sometimes closer in the Rangers system. He made an All-Star team and played with future major leaguers, but he never made it higher than single-A.

He went on to get his degree in chemistry and become and embryologist. He's also stayed in touch with the game as a pitch clock keeper for the Oklahoma City Dodgers.
Graves started with the Rangers, having been taken by the club in the 39th round of the 1989 draft out of Oklahoma City University. He chose to go pro, rather than return for his final year of eligibility.

He recalled his first taste of the pros being on the campus of Montana Tech University, tucked away on the edge of Butte. Players stayed in the dorms and played at the on-campus stadium.

"You're really very secluded from just about everything up there," Graves said.

On the field, Graves recalled having plenty of good outings and plenty of bad outings. According to Baseball-Reference, Graves got into 26 games, mostly in relief. He picked up four wins and four saves, turning in an ERA just under 3.

As Graves tried to make the transition to the pros, the hitters he faced were trying to make the same transition. Graves saw it as simply going out and doing what he knew how to do.

"I don't think it was easier or harder," Graves said. "I think it was just it is what it is, go out and pitch the best that you can."

His only start, something he called a highlight of the season for him, came in an emergency role. That night's scheduled starter, he recalled, decided to stay out past curfew the night before and the manager turned to Graves. 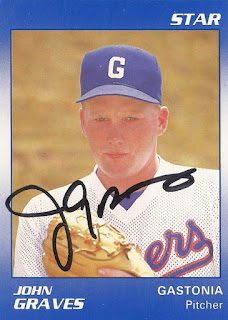 "It was nice that I got the opportunity to get a start in," Graves said. "I hadn't started in about four years. It was good."

Then there were the bus rides and trying to live off the $10-per-day meal money. The Pioneer League stretched from Medicine Hat, Alberta in the north to Salt Lake City, Utah in the south. "They were long road trips," Graves recalled.

Graves returned to school that fall to work on finishing his degree. He then experienced his first spring training the next spring. He came out assigned to single-A Gastonia in the South Atlantic League, playing with future major leaguers like Jose Oliva and Joey Eischen.

The play at Gastonia, he recalled as not being that much different than at Butte. He just went out and did the same thing he did at Butte, pitch.

He pitched well enough the first half of the year to make the South Atlantic League All-Star game in Greensboro. Graves recalled pitching one inning in the game, giving up a walk and a home run.

He recalled giving up the home run to a guy named Ken Trusky. Trusky certainly wasn't a home run hitter, but he took Graves deep over the short fence at Greensboro.

"When the game was over, he signed the ball and said 'thank you for my first home run,'" Graves recalled. "I think he was just being funny - it was all in good fun. It was quite funny."

Graves said he still has that ball at the house.
He also recalled a bench-clearing brawl during a game against the Charleston Wheelers. "We played hard that year," Graves said.

Early on in the year, Graves' Gastonia Rangers suffered tragedy. Fellow pitcher Ronaldo Romero collapsed during a game May 14 and died. Romero was just 19 years old. (More on Romero's death)

"That's something as a player you really don't deal with," Graves said of Romero's death.

Graves was in the left field bullpen. Romero, the starter, got two innings in. In the third inning, Romero collapsed in the dugout. He died at the hospital.

Graves remembered meetings and counselors. The Gideons gave the team Bibles. He recalled all the efforts basically trying to soften the blow.

He recalled Romero's death reminding everyone to live every day right. He recalled having some good talks about it with teammate Barry Winford in the outfield during batting practice.

"That definitely brought everybody back down to earth and made us realize everything we had and how fortunate we were," Graves said.

Graves finished out the season with 33 appearances, all in relief. He won three games, saved 13 and finished with a 2.01 ERA.

Graves soon, however, found himself moving on from baseball. He recently found his way back, through a new aspect of the game, the pitch clock. (Go to Part 3)