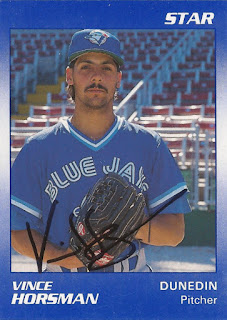 MANCHESTER, NH - Vince Horsman pitched well enough to earn a pro contract, but did he want one?

"I don't want to say you're like a pioneer," Horsman told the Greatest 21 Days, "but it doesn't happen. If I was growing up and saying I want to be a pro hockey player, play in the NHL, you had a better chance of doing that than doing what I did.

Horsman soon signed with the Blue Jays as a 17-year-old free agent, a time before Canadians entered the regular draft pool. He then set out to become, by one account, only the second Nova Scotia-native to make the major leagues in the previous 70 years.

In 1991, Horsman did that. He made the majors with the Blue Jays. He then became a regular on the mound with Oakland. In all, Horsman saw time in five big league seasons, in 141 major league games.
He's since gone on to a career as a coach in the minors. He spoke with the Greatest 21 Days at the close of the 2016 season in Manchester, N.H., where he served as pitching coach for the Blue Jays' AA team, the New Hampshire Fisher Cats. Horsman is continuing in that role in 2017.

Horsman grew up in Dartmouth, N.S., just outside of Halifax. He got involved in baseball following his older brother, he recalled. His older brother played, so Horsman wanted to play, too.

He also recalled his father instilling in him the values that would later play a major role in his coaching career: Treating people the way you'd want to be treated.

"If you do that and you do the right thing," Horsman recalled his father telling him, "then you can never be wrong."

By the age of 12 or 13, he recalled realizing he was pretty good for his age group.

"Then as I continued to get older," Horsman recalled, "I realized I was pretty good, not only for my age group, but for my province."

He graduated from Dartmouth High School, but there was no high school ball there, only summer leagues, Horsman recalled. The season began in late-May and ran until early September.

Horsman played well enough in summer ball to make a tournament in New Brunswick as a 17-year-old. His future turned on two games there.
Horsman recalled pitching against the defending national champions, taking a no-hitter into the final inning. He then pitched against the eventual gold medal team and pitched well again. Over 15 innings of work, Horsman recalled striking out maybe 30 hitters.

"That kind of grabbed their attention," Horsman said of the Blue Jays.

When Prentice called to inquire if he be interested in playing as a pro, Horsman said yes, while thinking about the short list of others in his situation who'd gotten the shot previously.

Prentice then had a follow up question: Could Horsman put a parent on the phone? Horsman summoned his father to the phone.

Horsman started with the Blue Jays in 1985 in rookie ball, in the "small little prairie town" of Medicine Hat.

Still in Canada, but across the country, Horsman recalled the biggest transition as simply being on his own. The then-18-year-old had to learn how to wash his own clothes and simply take care of himself.
On the field, he recalled playing well at the beginning. Almost too well.

"I started off really good," Horsman recalled, "and I was like, 'this is easy.' Then, all of a sudden, I didn't pitch so well and I realized it wasn't so easy.'"

By the end of the season Horsman had gotten into 18 games for Medicine Hat. His ERA had climbed to 6.25.

"Then I knew I had a lot of work ahead of me," Horsman added. "I resigned myself to the fact that I just had to work hard, because I was just behind the Americans."

"Just pay attention," Horsman recalled of one way he worked to catch up. "Just pay attention and, like my dad said, just work your tail off. I did that and eventually I caught up and I started separating myself."

Horsman spent the next two seasons at single-A. He then split the next three seasons between high-A Dunedin and AA Knoxville. He battled injuries along the way.

He recalled realizing that season that he could pitch in the majors, that what he was doing was good enough to get big league hitters out. His coaches reinforced that, too.

Then, that September, Horsman's hard work paid off when his pitching coach broke the news: Horsman, the kid from Nova Scotia, was going to the majors. (Go to Part 2)