Features on each member of the 1990 San Jose Giants, single-A affiliate of the San Francisco Giants. Players are as included in that year's team set. 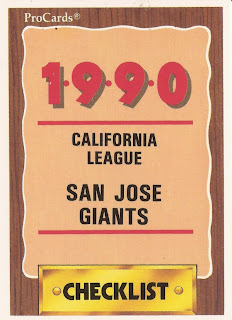 1 - Pat Brady, Swinging Good
Pat Brady swung well in August 1992 for AA Phillies. He never made the bigs.
2 - Jeff Brauning, Long Way
Jeff Brauning picked up his college conference's hit streak record. He turned pro, but played just two seasons.
3 - Don Brock, Another Reason
Don Brock helped his school beat Texas. He played as a pro for three seasons.
4 - Craig Cala, Instructing Kids
Craig Cala's passion was to instruct kids. He's done that since two-season pro career.
5 - Royce Clayton, No Better Feeling
Royce Clayton got his call up to the bigs, his celebration started with his dogs.
6 - Adell Davenport, Trying Too Hard
Adell Davenport tried too hard in Alaska. He went on to play eight pro seasons. He never made the bigs.
7 - Dick Dietz, Called Back
Dick Dietz nearly stopped Don Drysdale's scoreless streak with a disputed hit-by-pitch.
8 - Brian Dour, Very Proud
Brian Dour was proud of his accomplishments as a high school coach. He coached after four-season pro career.
9 - Joe Estes, Two Wins
Joe Estes picked up two wins in relief for 86 College World Series champs Arizona. He played five seasons as pro, but he never made the bigs.
10 - Dan Fernandez, Backup Catcher
Dan Fernandez thought he could play in the bigs. He played as a pro for nine seasons, but he never got a chance to prove it.
11 - Chris Fye, Two Hits
Chris Fye came out of Nebraska to turn pro. He played just three seasons, never above high-A.
12 - Vince Herring, Younger Pitcher
Vince Herring tried a pitch mastered by older hurlers, the knuckleball. He never made the bigs.
13 - Steve Hosey, Raw Tools
Steve Hosey's first major league home run was almost Candlestick Park's last. It was his last.
14 - Dominick Johnson, Important Things
Dominick Johnson lost his father to cancer, his daughter is cancer survivor. He played nine seasons, but he never made the bigs.
15 - Jim Jones, Well Orchestrated
Jim Jones executed a 'well-orchestrated' hit-and-run at single-A San Jose. He played five seasons, never made the bigs.
16 - Troy Mentzer, Fought Himself
Troy Mentzer fought himself sometimes. His pro career lasted just 29 games.
17 - Jeff Morris, Seen Much
Jeff Morris saw a lot of places in his career, from college to the pros to Australia.
18 - Jimmy Myers, No Doubts
Jimmy Myers had no doubts he belonged in the majors. He got there in 1996 for 11 games.
19 - John Patterson, As Good
John Patterson didn't quite realize his dream in 1993, but winning a pennant race game with a home run was just as good.
20 - Dan Rambo, So Close
Dan Rambo had a lot of dreams when he was young. He got close to realizing one.
21 - Kevin Rogers, Almost Unhittable
Kevin Rogers tried a comeback in 1997, from family illnesses, as well as own condition.
22 - Gary Sharko, Threw Hard
Gary Sharko was a "hard-throwing relief ace" at short-season. He played five seasons, but never made the bigs.
23 - Kerry Shaw, Better Hitter
Kerry Shaw was one of Salt Lake's better hitters. He couldn't turn that into a long pro career.
24 - Reuben Smiley, Next Time
Reuben Smiley got nervous in front of a scout. After advice, he performed. He played a decade, but never made the bigs.
25 - Tom Spencer, Looking For
Tom Spencer wasn't a name manager, but he did get a long career as one in the minors.
26 - Scooter Tucker, Game Confidence
Scooter Tucker knew confidence was important. He took his confidence to the bigs in three seasons.
27 - John Vuz, Preventing Hits
John Vuz went from getting hits in college to trying to prevent them as a pro. He never made the bigs.
28 - Elanis Westbrooks, No Surprises
Elanis Westbrooks helped the 2008 Rays as an advance scout. He played four seasons as pro in the Giants system.
29 - Scott Wilson, Career Change
Scott Wilson went from coach to trainer to coach again.
Posted by Steve78 at 12:59 PM