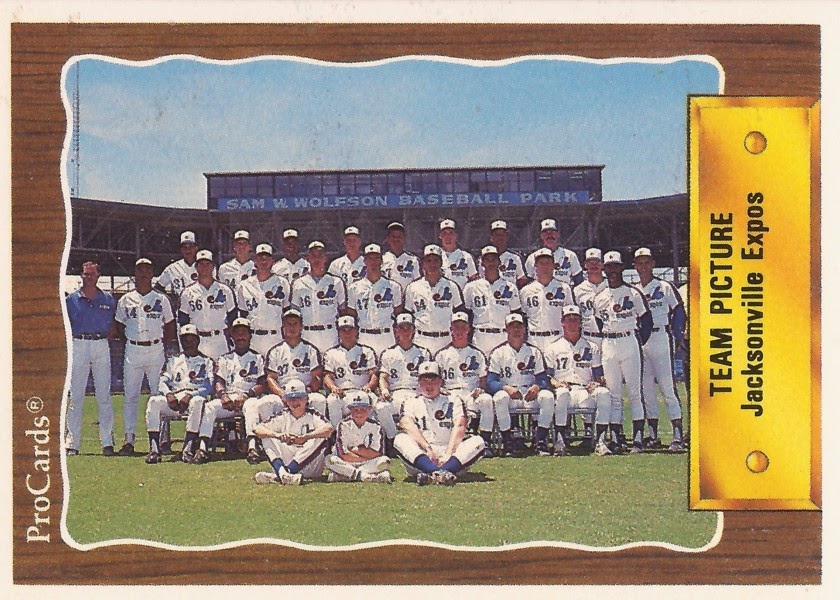 Features on each member of the 1990 Jacksonville Expos, AA affiliate of the Montreal Expos. Click on the player's name to read more.

Interview (1)
1 - Lorenzo Bundy, Come True
Lorenzo Bundy finally made the majors as a coach with the Marlins, more than 15 years after he began. 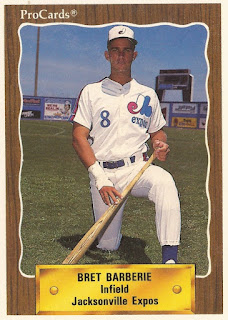 1 - Bret Barberie, Natural Spot
Bret Barberie was a scrapper-type infielder. He played in six major league seasons.
2 - Brian Barnes, Had Heart
A scout's chance on Brian Barnes paid off with Barnes getting time in five major league seasons.
3 - Chris Bennett, Winter Roster
Chris Bennett made the Expos winter roster in 1989. He couldn't make an in-season major league roster.
4 - Kent Bottenfield, Tough Insides
Kent Bottenfield had tough insides, took them to an 18-7 record in 1999.
5 - Mario Brito, Big Difference
Mario Brito pitched well in the 1990 AA playoffs. He never got the chance to pitch well in the majors.
6 - Lorenzo Bundy, Hands On
Lorenzo Bundy wanted teams to hit. He now wants them to score as the Dodgers third base coach.
7 - Jeff Carter, Hoped For
Jeff Carter believed he could fill a major league relief role. He made the bigs for five outings.
8 - Archi Cianfrocco, That Confidence
Archi Cianfrocco gained confidence at the plate, enough for seven seasons in the bigs.
9 - Greg Colbrunn, Was Himself
Greg Colbrunn hit a mammoth home run in his 11th major league season. He hit 98 total. 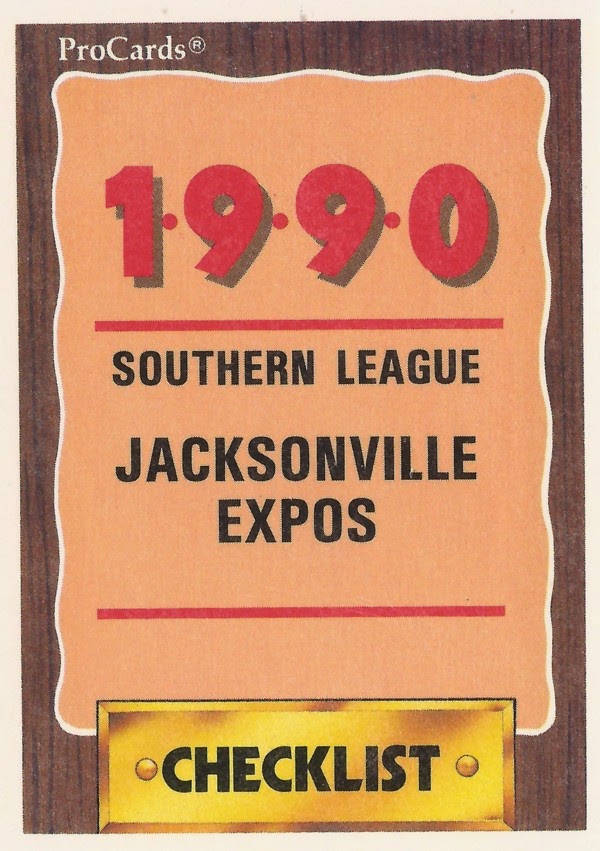 10 - Nardi Contreras, Just Worked
Nardi Contreras didn't have big name but he served as a major league coach for the White Sox, Mariners and Yankees.
11 - Wilfredo Cordero, Athletic Ability
Wilfredo Cordero had physical ability and good hands, enough for 14 major league seasons.
12 - Terrel Hansen, Wrong Time
Terrel Hansen got his call to the bigs, but didn't get into a game. He never got back.
13 - Cesar Hernandez, Differences Made
Cesar Hernandez made differences in major league games, good ones and bad ones.
14 - Bryn Kosco, Career Day
Bryn Kosco had a career day in college. He played nine seasons as pro, but he never made the bigs.
15 - Richie Lewis, Most Of
Richie Lewis helped the Marlins with his arm and his bat. He played in seven major league seasons.
16 - Bob Malloy, Didn't Matter
Bob Malloy made the jump from single-A to the majors. He had two brief stays. 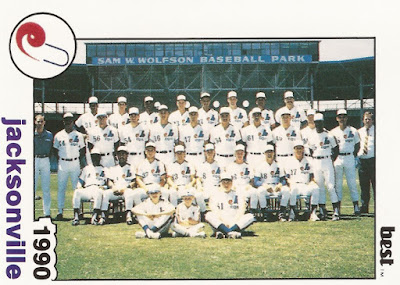 17 - Jerry Manuel, Put Value
Jerry Manuel took his plan to the 2000 AL Manager of the Year award with the White Sox.
18 - Edwin Marquez, Visa Problems
Edwin Marquez ran into visa problems as a player. He never made the majors.

19 - Omer Munoz, Good Impression
Omer Munoz never got a chance to play in the majors. He played 11 seasons.
20 - Chris Nabholz, Some Breaks
Chris Nabholz came back from injury, got some breaks and pitched in six major league seasons.
21- Bob Natal, Didn't Disrupt
Bob Natal contributed to a win after getting recalled from the minors. He played in six major league seasons.
22 - Trevor Penn, Improved Eye
Trevor Penn saw the ball well after returning in 1995. It was his final year as a pro.
23 - Yorkis Perez, His Part
Yorkis Perez claimed his part of the plate. He did so in nine major league seasons.
24 - Tim Peters, Pitched Well
Tim Peters pitched well in an exhibition against the big club in Montreal. He never got into a regular season big league game.
25 - Hector Rivera, Slowed by Injuries
Hector Rivera's career was slowed by injury. He only played three seasons.
26 - Miguel Santana, Lead Off
Miguel Santana tried to stretch a single-A hit too far in 1988. His career never stretched to the majors.
27 - Tim Sossamon, Good Velocity
Tim Sossamon had good velocity in his first season. He eventually played five, but he never made the bigs.
28 - John Vander Wal, Liked Fastballs
John Vander Wal liked fastballs. He hit them in 14 major league seasons.
29 - Jay Williams, Best Case
Jay Williams' preference is not to be noticed.
30 - Darrin Winston, Saddest Story
Darrin Winston never gave up. He then made the bigs. He passed away in 2008 at age of 42.
Posted by Steve78 at 9:00 PM