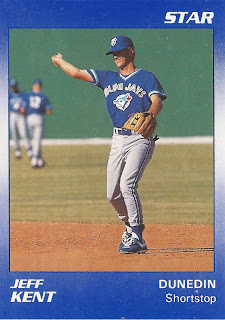 Throughout his long major league career, Jeff Kent separated his emotions from the game, he told The Associated Press in 2009.

For Kent, it was about how others saw him and his focus on playing, according to The AP.

"If you allow yourself as a player to get emotionally involved in every little thing that happens, I don't think you can stay as consistent as you ought to in this game," Kent told The AP. "I wanted other people to perceive me as a guy who was level emotionally."

Kent spoke to The AP on the occasion of his retirement after 17 seasons in the majors. He hit 377 major league home runs and knocked in 1,500 runs, all while cultivating a certain reputation as a loner in the clubhouse, among other terms.

But Kent also made it onto five All-Star teams, won the 2000 National League MVP award and has remained on the Hall of Fame ballot through five cycles, hovering around 15 percent of the vote.

Kent's long career in baseball began in 1989, taken by the Blue Jays in the 20th round of the draft out of the University of California-Berkeley.

Kent started with the Blue Jays at short-season St. Catharines, then hit high-A Dunedin in 1990. He went 2 for 3 in a May game, with a run scored. He then made AA Knoxville in 1992 and Toronto to start 1992.

He got into 65 games for the Blue Jays before being traded to the Mets for David Cone. He then stayed in Queens as the Mets' starting second baseman into 1996. He hit 20 home runs in a year twice there. In April 1994, Kent explained his approach to The New York Times.

"I'm a negative guy," Kent told The Times. "I'm not a positive guy. That's what motivates me -- the negatives of the game. The fear of failure, the embarrassment of failure, the fear that I'll let my teammates down -- all that drives me."

Reflecting on his career and his chances at the Hall of Fame in 2018 to MLB.com, Kent believed he might fare better if he played at another time.