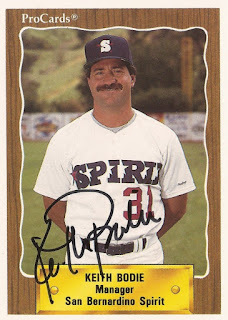 Bodie was managing single-A Asheville that year in the Astros system, still only a few years into his own coaching career. Biggio was fresh out of Seton Hall University, taken by Houston with the 22nd-overall pick that year.

"He was mature beyond his years," Bodie recalled recently to The Greatest 21 Days. "His passion for playing was exemplary every time he stepped on the baseball field. He was going to be the best.

"No excuses," Bodie recalled of Biggio's approach to the game at that early stage. "He had thick skin. He accepted criticism very well, which a lot of players don't. That's why he's a special player who ended up in the Hall of Fame."

Biggio was one of what has become a lengthy list of players who played for Bodie over the years. Bodie's coaching career has lasted for three decades now, all after a decade as a player.

His coaching career has taken him from short-season Auburn on up to AAA Calgary and more recently Round Rock and Oklahoma City.

"You like to think that you had a lot of influence on their careers," Bodie said, listing off some of the players he's coached. "Some of them really appreciate it and many years later say 'thank you.' So that's the reward that you get giving them the best of your efforts day in and day out."
"That's what it's all about," Bodie said. "It's their time now and I have the knowledge and experience that I can share to expedite their progress. I can't make them good. I just make them better by giving them the experience and advice that they need."

Bodie is continuing his coaching career in 2015, serving as hitting coach for the AA Bowie Baysox in the Orioles system. He spoke to The Greatest 21 Days in August 2015 at New Britain Stadium in Connecticut, where his Baysox were preparing to take on the New Britain Rock Cats.

Bodie's long career in baseball started back in 1974, when his hometown Mets took him in the third round of the draft out of Brooklyn's South Shore High School.

"I played all sports growing up, but my passion was for baseball," Bodie said. "I played baseball all the time."

Bodie played well enough to get scouted as early as his freshman year in high school, he recalled. Despite the attention, he recalled trying to concentrate on what he was doing and that was playing.

That he was gaining notice from scouts wasn't the point, he recalled.

"I played baseball because I wanted to do good at it," Bodie said. "There was a point where I did a lot better at it than other kids, but I didn't take notice of that. That wasn't my focus. My focus was simply playing for the love of the game."
He would play and all those other things would fall into place, he recalled.

They even fell into place after he missed his entire senior year to injury. The Mets had already seen enough to use their third-round selection on him.

"It was pretty good," Bodie recalled. "I was excited about getting drafted by the Mets. It was a dream come true, so it was very exciting."

Back from his injury, Bodie went directly to the rookie Appalachian League and Marion, Va.

He recalled the culture shock of going from Brooklyn, where his high school had 8,000 kids to a town that had about as many people in the entire town.

But also, he recalled, the game was the same.

"You're playing baseball, so I didn't pay much attention to that other stuff," Bodie said. "They were paying me. They gave me money, but that wasn't important either. I was out there playing baseball against the best players in the world and just trying to compete and fit in."

Bodie played at Marion for 1974 and 1975. He then moved to single-A Wausau for 1976 and then AA  Jackson for 1977.
"You're excited about being there," Bodie said of his early time in the minors. "You're appreciative of the opportunity. You think you're going to be a big leaguer. That's what you're shooting for."

That's what he was shooting for, but he also said it wasn't the same as players today.

"They think about circumstances," Bodie said of players today. "I thought about playing. That's all I cared about."

"When I played, everybody was afraid that that game was going to be their last," Bodie said. "There was no six-year free agency. There was no bouncing around. It wsa a different ballgame."

"I didn't give a whole lot of thought to the political part of the game. I just tried to do the best I can and I knew if I did well, you went higher."

Bodie stayed with the Mets through 1979, having played at Jackson for three seasons. He moved to the Astros and AA Columbus for 1980. He then made AAA Tucson for 1981, his only time at AAA. He didn't get a call up to Houston.

Soon Bodie's playing career was over and he had a new opportunity, as a coach. (Part 2)