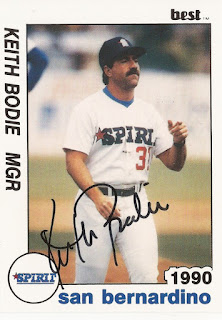 Keith Bodie had played in the minors for nearly a decade, making it to AAA, but he didn't make the majors. By the end of the 1982 season, the end of his playing career was apparent.

His second career, one as a coach, was about to begin.

"It's a big transition," Bodie recalled recently to The Greatest 21 Days. "Your dreams come to an end. It's more than just a career change, it's a life change. It takes a long time to get over that."

Bodie transitioned into that second career as a coach, one that has lasted now for more than three decades and continued into 2015.

"Thankfully," Bodie said, "I have found a lot of gratification in doing what I'm doing now. It eases the reality of not playing the game that you love to play."

Bodie spoke to The Greatest 21 Days recently in New Britain, Conn., before his Bowie Baysox took on the AA Rock Cats. Bodie served in 2015 as hitting coach for the Orioles' AA club in Bowie.

Bodie's last significant playing time came in the Astros system that year in 1982. He'd seen AAA Tucson the year before, but he split time in 1982 between AA Columbus and even single-A Daytona Beach.
Then his playing career was over.

"It wasn't on my terms," Bodie said of his playing career's end. "I wanted to stay in the game and they offered me an opportunity to do that as a coach."

Bodie couldn't go to another team. In the early 80s, he recalled, players still had few paths to move to other organizations.

"There wasn't a lot of opportunities when you ran out of the chances you were given," Bodie said.

Bodie took that chance to coach and he moved on.

"Some of us are born to do certain things and my passion is baseball," Bodie said. "I could not see my life without baseball and I wanted to be in it."

By 1983, Bodie was coaching in the minors with the Astros. He served that year as a coach at single-A Asheville. He went on to coach at AA Columbus in 1985.
In 1986, he got his first managerial job at short-season Auburn. His second managerial job came in 1987 at Asheville. That's where Bodie served as the first professional manager of future Hall of Famer Craig Biggio.

Bodie made his first organizational change in 1989, serving as manager at single-A Clinton with the Giants. In 1990, it was manager with the Mariners at high-A San Bernardino.

"I had some good players on that team," Bodie recalled when asked about that 1990 San Bernardino squad, listing off Greg Pirkl, Pat Lennon and Roger Salkeld from memory.

Bodie made it back to AAA for the first time as a manager in 1991 at Calgary. He stayed there for three seasons.

Over the years since, Bodie has returned to the Giants and Astros systems. He's also managed in the Royals system. He's served as a manager, coach and minor league field coordinator. His 2015 campaign was his first season coaching in the minors for the Orioles.

He's never made it to the majors for a permanent job. He has made it up for a couple Septembers, once in 2001 with the Royals and once later with the Astros.
Bodie noted that many of the guys in the majors he coached against or managed against at some point in the past.

"It's not a big difference," Bodie said. "The game is played more consistently and crisper and people do the right thing more often. But, you know, it's baseball."

Still, don't get him wrong, there's a difference.

"I don't care what level you go to, it's better in the big leagues. No doubt about it," he said, "but for all intents and purposes it's baseball."

Bodie responded: "Until they rip the uniform off me."