Features on each member of the 1990 Riverside Red Wave, single-A affiliate of the San Diego Padres. 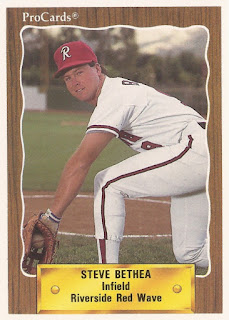 1 - Steve Bethea, Valuable Player
Steve Bethea showed his value in the field. He never made the majors.
2 - Scott Bigham, Much Fun
Scott Bigham tried as hard as he could. He didn't make the bigs.
3 - Bruce Bochy, Highly Respected
Bruce Bochy was highly respected long before he took his teams to three World Series titles.
4 - Renay Bryand, The Difference
Renay Bryand knew the game. Made AAA, not the bigs.
5 - Nate Colbert, Believe It
Nate Colbert couldn't believe it. The umpire couldn't either.
5 - Jim Daniel, Evaluated Players
Jim Daniel evaluated players as a trainer for more than two decades.
7 - Rick Davis, Stayed Optimistic
Rick Davis stayed optimistic he'd get his call. He never got it.
8 - Danny Deville, Like That
Danny Deville didn't throw hard, but he got them out. He never made the majors.
9 - Jay Estrada, Draft Pick
Jay Estrada made his college Hall of Fame. He played five pro seasons
10 - Reggie Farmer, Another Calling
Reggie Farmer went pro in baseball, not football. He never made the majors. 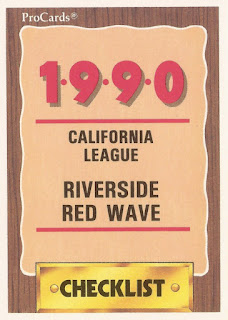 11 - Mark Gieseke, Nothing Fancy
Mark Gieseke didn't do anything fancy. He just got hits.
12 - Vince Harris, Played for Bochy
Vince Harris' manager returned to the bigs. Harris never got there
13 - Brian Harrison, Super Job
Brian Harrison did well upon his return. He never made the majors.
14 - Chris Haslock, Continued Chance
Chris Haslock knew as long as he played, there was a chance.
15 - Steve Hendricks, Good Breaks
Steve Hendricks got good breaks early. Not enough for the bigs.
16 - Kevin Higgins, Heart Pounded
Kevin Higgins' heart pounded after his first major league hit.
17 - Kerry Knox, Like That
Kerry Knox was his short-season club's stopper. He never made the bigs.
18 - Heath Lane, Decision Made
Heath Lane made his decision to move on. He then became a high school coach. 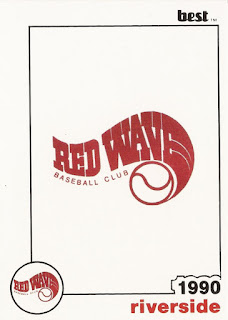