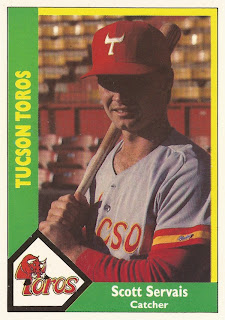 Spending his first four seasons in the majors mainly as a backup catcher, Scott Servais waited for his shot at starting, The Chicago Tribune wrote.

While he did, Servais kept his eyes open.

"I'd never just watch the games," Servais told The Tribune in 1996. "I'd study and grade the regular catchers daily. I'd ask myself, 'Why is this guy better than me?' I'd figure what I would do when I got my opportunity to play regularly. And I thought, 'When that opportunity comes, I won't let anybody take the position away from me.' "

Over the next three seasons, Servais did just that with the Cubs, getting into at least 113 games each season.

In all, Servais would see time in 11 major league seasons and 820 big league games. After his final big league game in 2001, Servais has continued in baseball, passing along everything he learned in his career. Servais has served as head of player development for the Rangers and, for 2012, assistant general manager for the Angels.

Servais' career began in 1988, taken by the Astros in third round, out of Creighton University. While in college, Servais played for Team USA in 1987, helping the team to the medal round of a tournament with three-run home run in a win over Puerto Rico.

With the Astros, Servais started in 1989, playing at single-A Osceola. He also moved up that year to AA Columbus. For 1990, Servais moved to AAA Tucson, hitting .218 in 89 games.

Servais returned in 1992 for another 77 games, hitting .239 in 205 at bats. In July, Servais saved an Astros win, blocking the plate and preventing a crucial run from scoring, The Associated Press wrote.

"I don't know how I caught the ball," Servais told The AP. "I guess it was just concentration."

By June 1995, Servais arrived with the Cubs in a three-player deal, hitting .286 in 52 games with his new team. That September, Servais hit a three-run home run against his old team, helping his new team to a win.

Servais told The AP he was happy in his new home.

"The Cubs send me out there every day and they've shown confidence in me. It's really made the difference," Servais told The AP. "I enjoyed my time in Houston and I like Chicago."

Servais spent the next three seasons with the Cubs. He then moved to the Giants in 1999, then finished out his career with short stints in Colorado and back at Houston.

Servais then served as a scout with the Rockies in 2005. He then joined the Rangers as head of player development. Servais was credited with helping Nelson Cruz become the hitter he became by changing his batting stance.

"I think all players get to that point where it's make or break. They're very coachable at that point, because they have nowhere else to go," Servais told MLB.com in October 2011 when talking of Cruz. "That's kind of where he was."

By November 2011, Servais was with the Angels, as assistant GM.