Eddie Mathews played basketball in college, not baseball; But he threw hard, like 90 mph hard 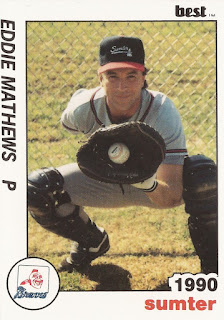 Eddie Mathews didn't do a lot of the things professional baseball players did before turning pro. But he did throw hard, like 90 mph hard, according to The Sumter Item.

Mathews didn't play baseball at Bradley University, he played basketball. He signed on with a baseball team after college, the Peoria Chiefs, as an assistant general manager, not as a player. But he did play in a local Sunday morning league. That's where he got noticed, The Item wrote.

"The Angels coach heard I was throwing near 90 and asked me to come out and let him get a look," Mathews told The Item later. "Some of the brass was there and they said they wanted to sign me for the next season."

Mathews soon found himself signed by a different team, the Braves. He went on to a pro career where he played seven seasons. He never made the majors, but he did make AAA.

Mathews' career began with the Braves in 1984 in the rookie Gulf Coast League. He got 15 outings and turned in a 2.35 ERA.

Mathews returned to the GCL for 1985. He also saw brief time at single-A Durham. He picked up five wins and a 2.09 ERA between them.

Mathews has since gone on to return to his first game, basketball. By 2015, he'd served more than a dozen years between local Peoria-area schools Notre Dame and Limestone. Upon his move to Limestone in 2011, a rival coach could only praise him to The Peoria Journal Star.