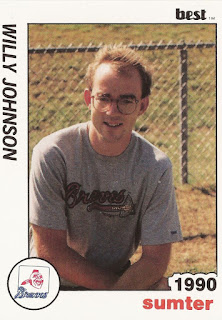 The South Atlantic League announced its All-Star selections for 1988 and the Sumter Braves had limited representation, according to The Sumter Item.

Sumter sent a pitcher to the game. They also sent their trainer, Willy Johnson, The Item wrote.

Johnson made that All-Star staff in his first year with Sumter and his third in the Braves organization. He went on to make at least two more All-Star staffs over his 13-year minor league training career.

He's since moved on to serving as a trainer for a high school in North Carolina and working for an orthopedic group there.

Johnson's training career began in 1986 after his graduation from Virginia Commonwealth University.

He started with the Braves as a trainer that year, serving at Idaho Falls in the Pioneer League. He moved on to Bradenton in 1987 and then Sumter in 1988, watching over a young David Nied.

He also worked in that time frame as a trainer in pro tennis, hockey and at Virginia Commonwealth for basketball.

Johnson stayed at Sumter through 1990, then moved with the organization to Macon. He went on to serve as trainer at Durham, NC, and Danville, Va.