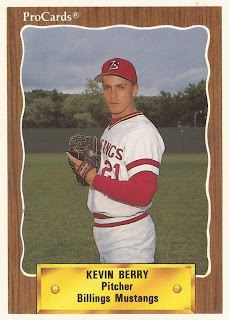 Kevin Berry had a new job as a volunteer assistant coach with the Alabama Crimson Tide and he was excited about the new opportunity, he told reporters.

The new opportunity was to work under his old coach at Northwestern State Jim Wells, who had just moved on to coach at Alabama.

"Alabama has always had a great winning atmosphere," Berry told reporters after signing on with the school in August 1994, "and I'm looking forward to helping them continue that tradition in baseball."

Berry turned to coaching after a pro career that lasted just two seasons, getting no higher than single-A.

Berry's pro career began in 1990, taken by the Reds in the 19th round, out of Northwestern State in Louisiana. Berry also previously attended Louisiana State and McLennan Community College.

With the Reds, Berry started at rookie Billings. He got into 19 games in relief, going 1-2 with two saves. He also posted a 4.84 ERA.

From his playing career, Berry turned to coaching, first serving under Wells at Northwestern State in 1993. He then followed Wells to Alabama.

Berry stayed at Alabama for two seasons. Soon, he was coaching on his own, taking the helm at Okaloosa-Walton Community College in Niceville, Fla. There, Berry saw at least one of his players head on to Alabama in 2001.

By 2006, Berry was head coach at Niceville High School, sending another player on to Alabama that year. In 2008, Berry saw his Niceville team make the regional finals.


"I told our guys today that the team that wins is the one that's going to face pressure, and they're not going to fear failure," Berry told The Northwest Florida Daily News in May 2008. "And that's what they did today."