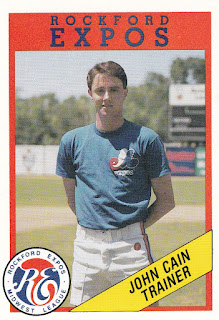 Years after his baseball training days ended, John Cain saw a big league city - and he did so at winter meetings. These winter meetings continued in relation to his initial job as a trainer for the Rockford Expos, but with a different focus.

These meetings were the Great Lakes Athletic Trainers Association's winter meeting in Minneapolis in 2011, and Cain went as an athletic trainer for local Rockford-area Ogle County Physical Therapy, according to The Rockford Register-Star.

The meeting covered baseball and softball injuries, concussions and Kenesio taping, among other topics, The Register-Star wrote.

Cain attended those meetings just over two decades after his last recorded time as a trainer in minor league baseball.

Cain's career as a trainer started about 1988, as an assistant with Rockford. He received a card in that year's team set, his hometown listed as Byron, Ill.

He didn't get a card in 1989, but returned to the Rockford set for 1990 as the team's full trainer. His card noted he had received his athletic training certification the previous year. It also incorrectly identified 1990 as his first year in professional baseball.