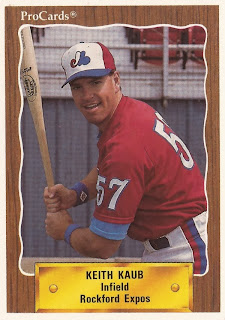 Keith Kaub hit for both power and average in 1988 for Cal State-Fullerton, helping his Titans to the College World Series, according to The Los Angeles Times.

His power came in the form of 20 home runs. His average came in at .347. Kaub was clear to The Times on which one he preferred.

"I'm not here to hit singles," Kaub told The Times. "I'm looking for a pitch up, a pitch I can drive."

Kaub soon turned pro, but he was unable to fully take that power and average with him. Playing in the Expos system, Kaub could only muster a total of 26 home runs and a .222 average over just three professional seasons, the extent of his professional career.

Kaub's career began that year in 1988, taken by the Expos in the 28th round of the draft, out of Fullerton. Kaub went to Fullerton out of Golden West College.

Moving on to Fullerton, Kaub continued hitting home runs. He hit a three-run shot in an April 1988 game. That home run was also a walk-off, hit with one out in the bottom of the ninth.

"This was one of the biggest hits of my career," Kaub told The Times after that game. "I was guessing a slider and just looking to hit the ball hard."

In late-May, Kaub had another two-home run effort, in the NCAA's South Regional.

With the Expos, Kaub started at short-season Jamestown. Over 61 games, Kaub hit .273, with eight home runs. In early July, Kaub was hitting .289. He was optimistic about his future, according to The Times.

"Maybe they (the Expos) have been surprised," Kaub told The Times. "I've heard I've gotten good reports in Montreal. I still have to improve. I'm only playing single A. It's going to take a couple of years to make the majors."