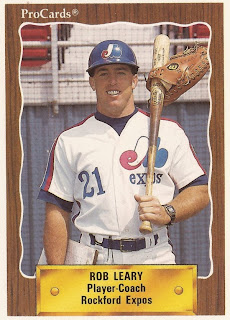 West Palm Beach catcher Rob Leary assessed his teammate Kevin Dean, telling The South Florida Sun-Sentinel that April in 1987 that Dean was probably one of the best athletes on the team.

"He's got the speed. He's got a strong arm (and) he's got good pop in his bat," Leary told The Sun-Sentinel. "I think it's going to take a couple of years to get used to playing all year, but he's improved in everything... his baserunning, outfield play and at the bat."

Within a few years, Leary would be assessing players in other capacities. He would be doing it as a minor league manager and coordinator. More recently, he's been doing that assessment as a coach in the major leagues.

Leary's career in baseball began in 1986, taken by the Expos in the 12th round, out of Louisiana State University. At LSU, Leary helped take the Tigers to their first College World Series appearance.

With the Expos, Leary played his first season in the rookie Gulf Coast League, but also got one- and two-game looks at high-A West Palm Beach and AA Jacksonville.

Leary didn't play his last game until 1990. Along the way, the catcher returned to West Palm Beach and Jacksonville, as well as played at single-A Rockford. At Rockford in 1990, Leary got his first coaching job, serving in the dual role as a player/coach.

"People figured out at a young age what kind of player Rob Leary would be -- he'll be a good manager," Leary told ESPN.com years later of his transition to coaching. "I took it as a great compliment."

Leary got his first managerial job the next summer, in 1991, back at Rockford. In 1993, managing West Palm Beach, Leary's Expos got into some trouble on the base paths, but Leary told The Sun-Sentinel baserunning was what his team was working on.

"We're aggressive, we're gonna be aggressive on the bases all year long," Leary told The Sun-Sentinel. "And I took some chances on the bases, but the guys know that we want to be aggressive. So I have no problem with it."

In 2010, Leary arrived in the majors, serving as assistant coach in Boston. In 2013, he was bench coach for the Marlins in Miami.

Upon making the Red Sox in Boston, Leary told his hometown San Mateo Daily Journal he was glad he made the switch to coaching when he did.

"I’ve always kept that goal (of making it to the majors) in front of me, but I never let it consume me," Leary told The Daily Journal. "Because looking ahead can get in the way of progress. The best thing you can do is concentrate at the task at hand and taking care of the here and now. You do that, everything else will take care of itself."