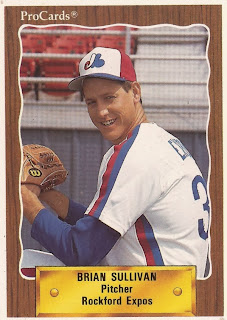 Former Arizona State quarterback Danny Sullivan played for the Sun Devils having had a family history in sports, including his grandfather and three uncles.

For Brian Sullivan, that pro career lasted two seasons and started with an independent club in the California League.

Brian Sullivan's career began in 1989, signed by the independent Reno Silver Sox out of Vanguard University of Southern California.

His work at Reno ended up catching the notice of the Expos, that team signing him and sending him to single-A West Palm Beach. His ProCards card, though, indicates he was acquired by the Expos early on in the season, in April.

Sullivan only got two starts at West Palm Beach, giving up four earned in 9.2 innings there.