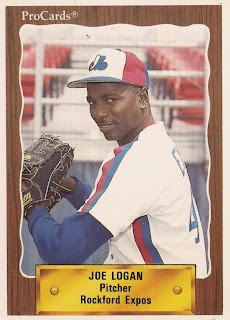 Baseball, Joe Logan explained to a news agency in 2011 after a youth clinic, is like life.

"In life, you have to deal with a bunch of failures and you have to pull yourself up and keep moving forward and trying different things to become successful," Logan told the news agency. "And baseball kind of mirrors that."

Logan was speaking to players in South Korea, as part of a sports diplomacy program from the U.S. State Department, the visit covered by Korea's Yonhap News Agency.

It's a role Logan has taken on in recent years, as a coach to youth in the Orlando area. He took on that coaching role after a four-season minor league playing career, one in which he made high-A but couldn't get higher.

Logan's playing career began in 1989, taken by the Expos in the 28th round, out of Florida Southern College.

Logan is credited with rounding out his career two years later, with independent Sioux City, getting into three games.

His playing career over, Logan has moved into youth coaching. He is now a coach with the Orlando Reds youth team in Florida. He's also had help from Cincinatti Reds Hall of Famer Barry Larkin.

One of the local players Logan worked with was Preston Cronk, who injured his dominant arm, and then learned pitch with his other arm, according to The Orlando Sentinel.

"The biggest thing was trying to get him mechanically sound," Logan told The Sentinel. "My hat is off to the kid. Never in my wildest dreams could I think about doing that."

With Larkin and others, Logan has also teamed up with on the diplomacy tours. The two have gone to the Far East and to South America, promoting better relations through baseball.

"I've seen some very strong arms," Logan told Yahoo! News during a 2011 trip to the Philippines. "I've seen some kids who really have an idea of what they're doing. They can throw the baseball. It's just some mechanical things that they're gonna need to work on to keep them strong and allow them to be consistent, because that's what baseball's about, being consistent."
1990 CMC-Pro Cards Tally
Players/Coaches Featured:1,408
Made the Majors: 730 - 51.9%
Never Made Majors: 678-48.1%-X
5+ Seasons in the Majors: 319
10+ Seasons in the Minors: 188
Posted by Steve78 at 9:00 PM