Originally published March 27, 2013
Bob MacDonald got his start with the Blue Jays. But the Blue Jays didn't offer that regular role he was looking for, he told The Associated Press in 1993.

The Tigers, though, saw potential in the lefty, purchasing him from Toronto and Tigers manager Sparky Anderson put him right to work.

"I have to thank Sparky for the opportunity to do that," MacDonald told The Associated Press in 1993. "I got here and Sparky threw me right in. It gave me the confidence I needed."

By the end of the year, MacDonald took that confidence to a total of 68 appearances for the Tigers, picking up three wins and saving three. But he couldn't keep it going, getting time in just two more big league seasons, ending his career in Japan.

MacDonald's career began in 1987, taken by the Blue Jays in the 19th round, out of Rutgers University.

With the Blue Jays, MacDonald started at rookie Medicine Hat, also getting time that first year at short-season St. Catharines and single-A Myrtle Beach. He returned to Myrtle Beach full time in 1988, getting 52 outings and posting a 1.89 ERA.

MacDonald made AA Knoxville in 1989, getting a look at AAA Syracuse, splitting time between the two levels again in 1990.

Also in 1990, MacDonald debuted in Toronto, called up in August. He got into four games in relief, giving up no earned runs in 2.1 innings of work.

MacDonald returned to Toronto for a more-extended look in 1991, getting into 45 games, posting a 2.85 ERA. His third campaign, though, saw his time drop to 27 outings. Then came the move to Detroit.

With the Tigers, he got into those 68 contests, posting a 5.35 ERA. In a June game, MacDonald shut down his old team, striking out hot-hitting John Olerud to preserve a 5-3 Detroit win.

MacDonald moved to the White Sox and Mariners systems in 1994, but didn't see the majors. He returned to the bigs in 1995, for 33 outings with the Yankees.

For 1996, MacDonald stayed in New York, but with the Mets. He got 20 outings there, ending his big league career.

His professional career then ended the next year, with a season in Japan, with the Hanshin Tigers. 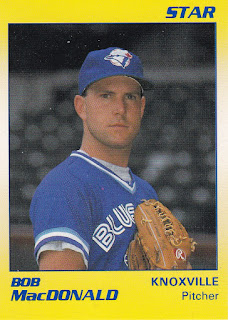