The patch included three games in six where Reno pitchers had given up more than 10 runs, The Gazette-Journal wrote.

"Our pitchers just have to start being more aggressive," Gallo told The Gazette-Journal then. 'They're just not concentrating on getting through their first few innings."

Gallo's time in baseball began in 1980, taken by the Giants in the 16th round of the draft out of San Diego State University.

In July 1985, Gallo made a bid for a no-hitter in the second half of a doubleheader, but a bad hop broke it up, The Petaluma Argus-Courier wrote.

"In the third or fourth inning I was thinking about a no-hitter," Gallo told The Argus-Courier. "I sensed it. The one hit they did get took a funny hop. Otherwise, Kris would have gotten it easily."

He then returned to the field with Reno in 1990 as pitching coach. The club went 71-68 in his only season as a coach. 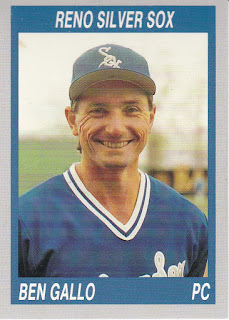