The night's opposing starter out of this May 1990 game, Mike Easley and his Reno Silver Sox capitalized, The Reno Gazette-Journal wrote.

With runners on second and third, Easley hit a two-run single to give Reno the lead, The Gazette-Journal wrote.

"(The starter) kept us off-balance with his forkball and his movement," Easley told The Gazette-Journal. "He did a good job of mixing up his pitches. We kept chasing the fastball."

Easley picked up that hit in his second season as a pro. He went on to play in two more. He topped out at AA.

Easley's career began in 1989, signed by the Indians as an undrafted free agent out of Texas A and M University.

At Texas A and M, Easley hit a two-run home run in a May 1988 regional win. He also extended an April 1989 lead against Texas with a two-run single.

With the Indians, Easley started in the rookie Gulf Coast League and at single-A Kinston. He saw 57 games in the GCL and six at Kinston and hit .302 overall.

Easley then played 1992 with the Giants at AA Shreveport. His glove saved two run in a May game, as the first baseman made a diving stop on a ball.

That April, The Shreveport Times asked Easley about his uniform number that year: 13. Easley had a simple answer, one that had nothing to do with superstition.

Easily saw 88 games overall that year and hit .206. That season marked his last as a pro. 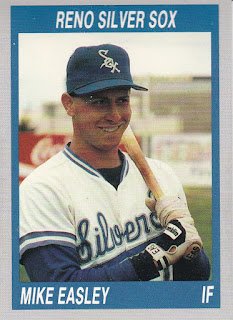