Dean Kelley played baseball 'every daggum day' of his life, loved it; Made AAA

In his second season as a pro in 1988, Dean Kelley had undergone a position switch from the outfield to the infield, and even took a bad hop that required stitches, The Tampa Tribune wrote.
But he was fine with just about everything, he told The Tribune that July.
"I'm hanging in there," Kelley told The Tribune. "Been playing ball every daggum day of my life, it seems, but I love it."
He ended up playing baseball for four more seasons after that. He made AAA in his final two seasons, but he never made the majors.
Kelley's career began in 1987, taken by the Yankees in the 10th round of the draft out of the University of Tampa. Kelly was also credited by his full name, Dean Alan Kelley.
Kelley started with the Yankees at short-season Oneonta. He hit .246 in 62 games. He made single-A Prince-William and AA Albany-Colonie in 1988. He hit .274 in 118 games overall that year.
He played 1989 back at single-A Fort Lauderdale. That July, he spoke with The Tampa Bay Times about moving back from AA, and his expectations going forward.
"They put me on the spot in Double-A and I answered the challenge," Kelley told The Times. "I think I did pretty well."
Kelley hit .230 in 110 games that year at Fort Lauderdale. Kelley moved to the Padres system in a trade for 1990 and played that year at AA Wichita. He then upped his average to .271 in 124 games.
He made AAA Las Vegas in 1991 and went .253 in 84 games. Coming out of that spring, a weight lifting injury slowed his start to the year, The Tribune wrote.
"This wasn't a good time (to get hurt)," Kelley told The Tribune that July. "I was right on target, I felt. I got drafted. I got a (good) trade. I wanted to make the majors in five years and this would have been my first full season. It would have been perfect."
Kelley returned for 1992, but he moved to the Mets system and he returned only briefly. He saw 11 games at AAA Tidewater to end his career. 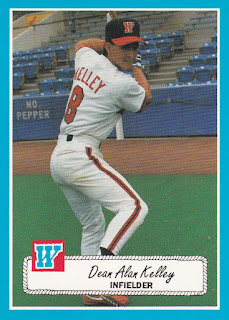