Craig Repoz joined the AA Jackson Mets in 1989 and his new manager Steve Swisher told The Jackson Clarion-Ledger he expected good things out of the infielder.
"This young man has a lot of talent," Repoz told The Clarion-Ledger that April. "There is a question as far as hitting, but I really feel he'll get the job done."
Repoz ended up hitting .216 that year, his fifth season as a pro. It also marked his last in the Mets organization. He played in just one more campaign. He topped out at AA.
Repoz' career began in 1985, taken by the Mets fifth overall in the January draft, secondary phase, out of Fullerton College.
Repoz followed his father into baseball. His father, Roger Repoz, made the majors over nine seasons, from 1964 to 1972. (His brother, Jeff Repoz, also later played two seasons in the minors.)
In 1978, The Los Angeles Times photographed the a 12-year-old Craig Repoz playing tennis with his dad. His dad later spoke to The Times about playing a different game with his son, baseball, recounting his son's reaction to his first spring training.
"Dad, (the coaches are) telling me the same things you’ve been telling me!" the father recalled Craig as saying, according to The Times.
Repoz started with the Mets at short-season Little Falls. He got into 71 games and hit .249.
He played 39 games that year at shortstop and 35 at third. The switch came after a psychological test ended with a low score for aggressiveness and after he had trouble turning double plays, Mets vice president Joe McIlvaine told The Hackensack Record.
"We moved him to third base and he batted over .300 there," McIlvaine told The Record in September 1986. "What could have become a player who washed out has become a solid major-league prospect just because we caught something in a test."
Repoz played 1986 at single-A Columbia. He hit .292 over 119 games there, with 22 home runs. He then saw single-A Lynchburg in 1987 and single-A St. Lucie in 1988. He hit .232 and 256, respectively.
He then hit Jackson in 1989, where he hit 19 home runs, but had that .216 average. He then moved to the Padres system for 1990 and played at AA Wichita. He hit .213 in 59 games to end his career. 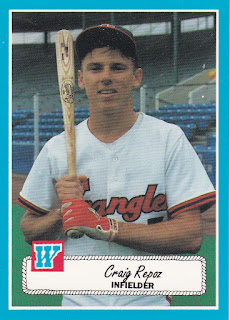