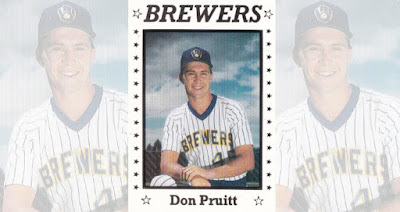 Don Pruitt felt he needed to add some weight going into his senior year of high school. His dad, did, too, The Arizona Republic wrote in July 1986.

His method: Peanut butter sandwiches, enough for him to gain 40 pounds in seven months, get sick of them, but still get them down, The Republic wrote.

"Other parents couldn't believe how big Donnie is," Pruit's father Dick Pruitt told The Republic then as Pruitt was rewarded with a college baseball scholarship. "It took a lot of self-discipline."

Pruitt took his self-discipline one from high school, to college and then to the pros. His pro career lasted four seasons. He made high-A.

Pruitt's pro career began in 1990, taken by the Brewers in the 23rd round of the draft out of the University of Arizona. He also played at Glendale Community College and his high school ball at Thunderbird High in Phoenix.

Pruitt started with the Brewers at rookie Helena. He went 5-4 over 13 starts on the year, with a 5.60 ERA. He had a rough outing in a late-season game, giving up seven, but recovered to retire 12 of 13 and get a no-decision.

He then returned to Stockton for 16 outings, 12 starts in 1993 and ended with a 5.99 ERA. He also saw five starts at rookie Pocatello that year and ended with a 9.58 ERA. That season proved his last as a pro. 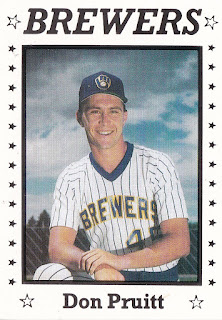