The Zimbauers didn't know exactly what round son Jason Zimbauer had been taken, but they knew the team, Milwaukee, father Chester Zimbauer told The Tinley Park Southtown Star just after the draft in June 1989.

"We're happy it's a team that's not too far away," Chester Zimbauer told The Star. "We have some relatives living in Wisconsin. The Zimbauer name ought to go over real well in the Milwaukee area."

Jason Zimbauer ended up signing with the Brewers. He went on to a career that saw three seasons. He made single-A.

His career also ended acrimoniously as he unsuccessfully sued the club and others related to it, alleging a misdiagnosed and mistreated shoulder injury.

Zimbauer's career began that year in 1989, taken by the Brewers in the fifth round of the draft out of Andrew High School in Tinley Park, Ill.

Zimbauer's work in Tinley Park gained him respect throughout the local high school baseball scene. In 1989, the year the Brewers drafted him, he went 16-0 for his squad.

In April 1989, The Times of Munster called Zimbauer "the Chicago area's premier prep pitching prospect" and one rival coach compared his own pitchers to Zimbauer.

Then, after the season that September, Zimbauer heard a "pop" in his shoulder as he tried to learn a new pitch, according to a later court filing. He went to team medical staff, but they found nothing wrong, he would later allege in the lawsuit that would ultimately be dismissed.

He then returned to the field for 1991, at single-A Beloit. He went 5-4 there, with a 3.76 ERA over 11 starts. Midway through that year, though, he reported pain as he threw that new pitch and then underwent surgery, according to his suit.

The Chicago Tribune caught up with him in May 1992 for a story on players moving from high school to the pros. He spoke as he continued to recover from his surgery and entertained thoughts of moving to the outfield.

''If you really want to play pro ball, why waste four years in college?'' Zimbauer told The Tribune. ''You could get hurt and ruin what might be your only chance at getting to the majors. Why do that?"

But, as he recovered, he would never take the field again. He remained under team care until April 1993. He then consulted another doctor, who diagnosed a partial rotator cuff tear, which was later confirmed, he contended in the suit.

He filed the suit in August 1993. The defendants ultimately included the Brewers. The suit, though, would be dismissed nearly three years later. 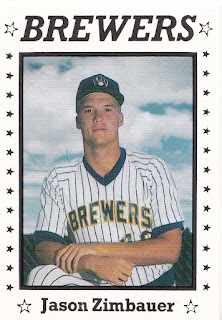