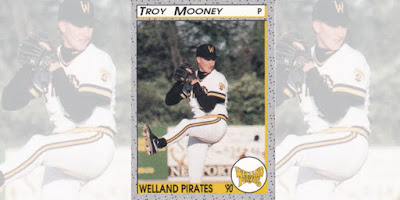 Troy Mooney went out for the Augusta Pirates in this June 1991 game and he pitched a gem, according to a citation in The Orlando Sentinel.

He went out and threw a seven-inning no-hitter, walking six and striking out four, according to the citation.

Mooney threw that no-hitter in his third season as a pro. He went on to play in six campaigns. His career topped out at high-A.

Mooney's career began in 1989, taken by the Pirates in the 41st round of the draft out of Ashland University in Ohio.

Mooney would be the last Ashland player to be taken in the draft until 2015.

Mooney started with the Pirates at rookie Princeton. He went 3-1 over 10 outings, five starts, with a 4.30 ERA.

He moved to single-A Augusta and short-season Welland for 1990. He saw two starts at Welland and  10 outings, eight starts at Augusta. He went 3-4 overall, with a 4.76 ERA.

Mooney returned to Augusta for 1991. His no-hitter proved one of his three wins that year in 32 outings, 11 starts. He then played at high-A Salem in 1992 and between Salem and the rookie Gulf Coast League in 1993. His play in the GCL suggests an injury.

Mooney's 1993 campaign marked his last in the Pirates organization. He then played a season in independent ball, at San Antonio and Tyler.

Mooney picked up a July loss with San Antonio, his sixth on the year. He soon moved to Tyler in a trade and started 2-0. His second win came as he gave up six hits in seven innings. He  went 5-8 overall, with a 5.32 ERA to end his career. 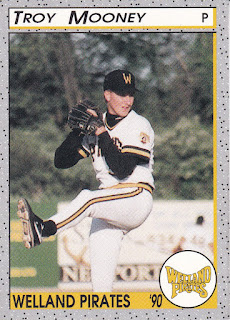