Kurt Miller started his career as a first-round pick of the Pirates. Four years later, he was with his third organization, the Marlins, but also getting close to the majors, The South Florida Sun-Sentinel wrote.

In spring 1994, Miller was just happy for the fresh start and chance, he told The Sun-Sentinel.

"I don't think there's all that pressure on me now," Miller told The Sun-Sentinel. "There's a lot of people here who don't know that I was a first-round draft pick."

That first-round pick went on to make the majors that year, getting four starts with the Marlins. He went on to see the majors in four more seasons, including seeing a high of 26 outings in 1996. He also later saw time in Japan.

Miller's career began in 1990, taken by the Pirates fifth overall out of West High School in Bakersfield, Ca.

He caught the Pirates' eye as he went 9-1 in Bakersfield, with a 1.41 ERA. He also struck out 109 in 60 innings his senior year, The Pittsburgh Press wrote.

"All I want to do is move up as quickly as possible," Miller told The Press then.

Miller played the rest of 1993 at AAA Edmonton and started 1994 there, too. Then, in June, he debuted with Florida.

Miller started four games with the Marlins and went 1-3. He gave up 18 earned in 20 innings pitched. After his first major league win June 16.

"I was pretty nervous, not knowing the hitters," Miller told The Tulsa World of his early experience. "And I was scared to death. I don't know. You always wonder if you can pitch in the big leagues and you don't know until you actually do it."

Miller saw three outings with the Cubs in 1998 and four in 1999 to end his major league career. He then finished his pro time in Japan, getting 11 outings with Hanshin in 1999 and 17 final outings there in 2000. 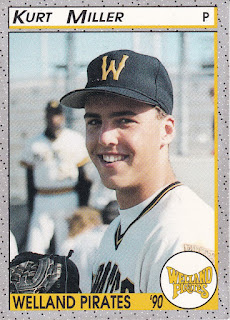