Jim Mallon worked as a college coach to improve his players on and off field; Briefly managed in minors

Longtime Southwestern University baseball coach Jim Mallon assessed his coaching style to The Williamson County Sun in 1991 as one where he worked to improve players both on and off the field.

By that point, Mallon had served as head baseball coach at Southwestern for two decades. He went on to coach there for another 13 years and amass a career record of 1197-601.

In between, Mallon served as manager of the 1990 Welland Pirates.

Mallon's long career in baseball began in the minors, signed by the Giants in 1966 out of Baylor University.

Mallon played five seasons in the Giants organization. He started at single-A Decatur, where he hit .310 in 125 games. He then made AA Amarillo in 1968. He stayed there for three seasons, hitting .313 and .310 his first two campaigns, then .294 in his final season, his last as a pro.

Mallon then arrived at Southwestern for 1971. Five years in, Mallon praised one of his pitchers' selection to the all-area team, citing hard work, according to The Georgetown Sunday Sun.

"Rick worked the hardest of any of our pitchers," Mallon told the paper, "but with his size, it takes a lot of hard work to get in shape."

By the time he retired, Mallon had amassed those 1,197 wins, the third-highest win total throughout the NCAA and NAIA. Along the way, his teams finished third in the NAIA World Series in 1984, then, after a change in divisions, his teams took five conference championships and made seven NCAA regionals.

His season in Welland appeared to be his only one in the Pittsburgh organization.

Southwestern inducted him into the school's Hall of Fame in 2010, then dedicated a statue to him in 2014. On the statue, the school had inscribed that 1991 quote from The Sun. 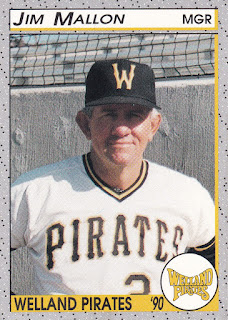