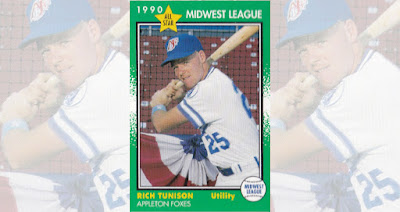 Originally published March 8, 2012
A couple of months into his professional career, Rich Tunison tried to put into perspective to The Orlando Sentinel the differences between college and the pros.

They mainly had to do with his expectations on the field.

"In college, you wanted to go 3-for-5 or you weren't happy. Here I'm happy to get a bloop single over third base or drive one in the gap,'' Tunison told The Sentinel. ''I can't remember the last time I've hit this low .250, but the pitching is better, the defense is better and that's why no one is hitting .400 in the league."

Tunison did well enough in his college career at Brevard County Community College to be selected by the Royals in the second round of the 1989 draft. He never could seem to do well enough in his professional career, though, to make the majors.

Tunison became a Royal farmhand after playing at Brevard County and, before that, in American Legion ball. Going into his college career, Tunison credited his American Legion coach Harry Durkin with helping him learn to switch hit, a skill he would continue into the minors.

"He's a pure switch hitter," Durkin told The South Florida Sun-Sentinel in June 1987. "I don't see any difference from one side to the other. It's not an easy thing to do. Too many people give up switch hitting because they don't have success right away. Rich realized it might take awhile."

At Brevard County, Tunison had success. By the end of spring 1989, he was batting .452 and getting the notice of scouts, The Sentinel wrote.

Selected by the Royals in the second round, Tunison's coach at Brevard County called the selection a "rags to riches story," The Sentinel wrote.

"Here's a kid who comes here as a non-draft pick and works hard and goes in the second round," Brevard coach Ernie Rosseau told The Sentinel. "What that tells me is that they think he can be a major-league player some day. He's a multitalented player that deserves the honor."

With the Royals, Tunison started at short-season Eugene, his average over 58 games dipping to .228. He lost a few games in late July due to an ankle sprain suffered in a home plate collision.

For 1991, Tunison hit AA Memphis, but his season lasted just 55 games. Another collision, this time in the field, limited his season. He hit .250.

"It is the toughest thing in the world right now," Tunison, told The Sentinel late that June of dealing with his injury and subsequent surgery. "Instead of going to the yard at 3 p.m., I leave at 6 in street clothes. It's tough watching from that dugout, but these things happen. You just have to work through them and get back to where you were."

Tunison, though, never really could. He returned in 1992, splitting the year between two teams he'd played on before, Memphis and Appleton. He hit .227 between them. He's not recorded as playing in 1993, but returned in 1994 for high-A Fort Myers, ending his career. 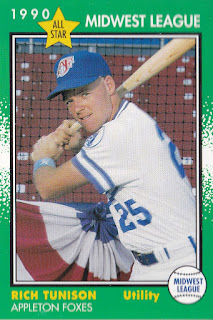