Mike Brown hit a game-winner in 1993; Played nine seasons, including two as a pitcher, made AA

Salem's Mike Brown got just enough of the ball in his pinch-hit appearance this night in August 1993 to drive home the run, The Roanoke Times wrote.

The run turned out to be the only run of the night in the 1-0 Salem victory, The Times wrote.

"The first two were fastballs, one outside and one inside," Brown told The Times of his game-winning at bat. "After the second pitch, I was picking up the ball coming out of his hand. Then he threw me another fastball. It was probably inside for a ball, but I managed to get enough bat on it."

Brown hit that game-winner in his fifth season as a pro. He went on to play in four more - and make the switch to pitching, but his career topped out at AA.

Brown's career began in 1989, taken by the Pirates in the fifth round of the draft out of Vacaville High School in California. Brown was also credited by his full name, Michael Brown.

Brown started with the Pirates in the rookie Gulf Coast League as a first baseman. He hit .221 in 39 at bats and knocked in 11.

Brown saw three more outings in 1997, two in the Gulf Coast League and one at Carolina to end his career. 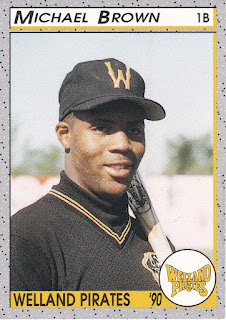