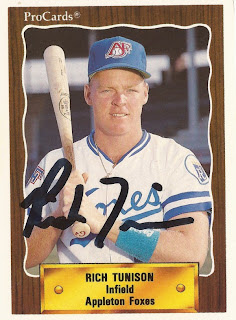 Rich Tunison and a couple of his teammates at Brevard Community College hopped in Tunison's Mustang that morning and headed for Tampa.

Once they got to their destination, the Florida community college fall All-Star game, they were almost surprised by what they saw, Tunison recalled recently to The Greatest 21 Days.

Scouts, Tunison recalled, seemed to outnumber fans in the stands by a ratio of 2 to 1.

"It turned out to be a bigger event than we all thought," Tunison recalled.

For Tunison, that game turned out to be a much bigger deal. In front of all those scouts, Tunison hit an opposite-field home run, a triple to right-center and, Tunison recalled, he even hit a single.

"What a showcase, what a great game for all us to showcase our talent," Tunison said. "I just happened to have a wonderful game there."

It was that game that Tunison pinpointed as the turning point of his young career. Going into that game, he'd gotten little interest from scouts. Coming out of it, the phone started ringing off the hook.

It was also a performance that set him on his way to his second-round selection by the Royals the next June.

Tunison's professional career, though, didn't go as he or the team had hoped, with injuries, and even a little bit of ego, conspiring to end his career sooner than anyone had hoped.
Tunison spoke with The Greatest 21 Days recently by phone from his Florida home, where he lives with his wife and 10-year-old daughter.

Tunison recounted his start in baseball as a youth, his breakout time in junior college and his early success in the minors.

He also recounted the injury to his wrist, suffered on a freak collision at first, a game he wasn't even slated to be in. Then there was the frustration of getting back and how his ego led to him finally refusing an assignment and quitting baseball.

Then there was his return for one final season, one where he recalled coming to the realization that he wouldn't make the ultimate goal of making the majors. With that realization also came the ability to finally sit back and enjoy the game.

In all, Tunison played in five seasons as a pro, from 1989 to 1994. Four of those seasons came in the Royals organization, the final one in the Twins system.

For Tunison, though, it started in his home state of Florida. There, he grew up playing in a state that was perfect for outdoor sports. And he played all of them.

By high school, Tunison began to gravitate toward baseball, reasoning somewhat incorrectly as it turned out, that the risk of injury was less in baseball than other sports like football.

At Cardinal Gibbons High School in Fort Lauderdale, his team was even good enough to win the 1987 state championship his senior year under coach George Petik. The win allow Tunison and his teammates to walk off the field as champions.

It was also at Cardinal Gibbons that Tunison learned the skill that would help him years later, when the scouts finally took notice. That skill was switch-hitting.

Harry Durkin, the father of one of his teammates took Tunison and several of the other players aside and suggested they learn to learn to bat from the opposite side.

A natural right-hander, Tunison seemed to be the one who took to it and kept at it.

"I failed miserably at the beginning and just stuck with it enough where it became an asset for me," Tunison recalled.

Tunison also credited his high school coach George Petik with ensuring he and his teammates got the work in that they needed, Tunison taking 100 cuts from each side of the plate every day.

But, however well Tunison or his team were doing, the scouts didn't seem to take notice. Or, at least, they didn't notice Tunison.

From Cardinal Gibbons, Tunison moved on to Brevard. Petik and Brevard's head coach Ernie Rosseau had a connection through baseball camps they ran together.

Tunison recalled Rosseau as a guru of hitting, a former instructor with the White Sox. "I was lucky to be around him each day just to pick his brain," Tunison recalled.

Under Rosseau, Tunison had a good enough freshman year to get that invitation to that fall junior college All-Star game.

"I just had a great game," Tunison said. "Literally a week later, the calls were pouring in."

With that fall performance in the books, Tunison built on that success, hitting over .400 and stealing essentially off the pitcher. He also built on it enough to get interest not just from the pro scouts, but from the bigger colleges, as well.

One of those bigger colleges that came calling was Louisiana State University. As Tunison helped Brevard make its way to the Junior College World Series tournament, Tunison already had the next year planned out: He was going to LSU.

He'd gone on a recruiting trip there, met with head coach Skip Bertman and signed under a full scholarship.

Then the Junior College World Series came around. Brevard won its slot playing in a regional held at Baseball City, home of the Royals. Whether that connection helped or not, it was the Royals who soon selected Tunison, with the 43rd overall pick in the June 1989 amateur draft.

Tunison recalled speaking to Bertman by phone afterward. Bertman was understanding. He still would have loved to have Tunison, Tunison recalled Bertman as saying. But, no matter what Tunison did at LSU, it would be hard to top a second-round selection.

"It really sealed the deal for me," Tunison said. As much as, now that I look back on it, I would have loved to go to a big school, and did two years there and taken my chances, at that time I was ready to go play pro ball."

And Tunison did go play ball, starting soon afterward as a minor leaguer with the Royals.