Tracy Smith tried to explain the trajectory of his coaching career in  2014 to the publication Inside Pitch.

He had previously coached at his alma mater Miami of Ohio, then moved to Indiana and, finally Arizona State.

"When I was coaching at Miami, I could've stayed there the rest of my career and been very happy," Smith told Inside Pitch. "But sometimes better opportunities present themselves."

Smith spoke to Inside Pitch as the head coach of Arizona State - and after he won 2013 National Coach of the Year honors with Indiana as he took the Hoosiers to the College World Series.

Smith put together his long coaching career after a brief playing career of his own. Smith played professionally for three seasons. He never made AA.

Smith's career in baseball began in 1988, taken by the Cubs in the 39th round of the draft out of Miami University.

Shortly after his playing career ended, Smith started to coach. He served as head coach at Miami University-Middletown, then as assistant coach at Miami of Ohio in 1993 and pitching coach at Indiana in 1995.

Smith then stayed at Indiana for nine seasons. His team went 49-16 in that 2013 campaign as the club made the school's first-ever Omaha trip.

"It's fun to hear people talking about Indiana baseball. It gives you a lot of personal pride," Smith told The Hamilton Journal-News as Indiana headed for the College World Series. "We're going to do our best to take advantage of this opportunity."

Indiana won its first game in Omaha, then lost the next two.

Smith then joined Arizona State as head coach for 2015. He remains coach there in 2020.

Upon arriving at Arizona State, Smith's wife Jaime spoke of her husband and his coaching skills to AZCentral Sports.

"Tracy is as good as they come," Jaime Smith told AZCentral. "He's always won uphill and I think he'll continue to work that hard and fight that hard for having a good program, but he'll have some factors that work more easily for him that he never had. He always stayed positive through whatever trials and tribulations there were but to be able to walk out in the sunshine and feel warm weather, that's huge." 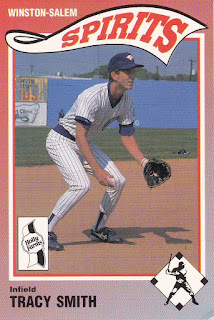