Originally published May 7, 2018
Jarrod Parker coached kids at a local high school. He mentored them as a pastor. He also presided over their funerals.

"Since 2002, I've buried 15 kids who have been shot," a frustrated Parker told The Rock Island Dispatch-Argus in 2013. As a reverend, "that comes to me with an obligation. I just don't want to show up when we're burying somebody. Let me prevent one one time."

The player-turned-reverend saw four seasons in pro ball. He never made AA. He's since gone on to serve first as a substance abuse counselor, then as a pastor near his hometown of Davenport, Iowa. More recently, he's assumed pastor duties in Omaha, Neb.

Parker's brief baseball career began in 1987, signed by the Braves out of Davenport Central High School and Muscatine Junior College.

He played his first two seasons in the rookie Gulf Coast League. The hurler started five games each seasons and had high ERAs in both.

His final season in pro ball came in 1990 with the Mets. He saw four games at single-A Columbia and four more at short-season Pittsfield to end his career.

Parker soon received his degree in religious studies from Marycrest College in Davenport and then studied at Trinity College of the Bible and Theological Seminary in Evansville, Ind., according to his current church St. Mark Baptist Church in Omaha.

After time as a counselor and gang task force expert, he followed his father and grandfather into the ministry, according to St. Mark Baptist. He first served with Greater Antioch Baptist Church in Rock Island and then founded The Word Church in nearby East Moline, Ill, in 2002. In 2017, he moved to St. Mark and Omaha.

In 2011, he led The Word Church to a new space in a renovated old church building, according to The Quad-City Times.

"Divinely speaking, I think it was the Lord's hand," Parker told The Times of the move. "It's an opportunity to do ministry downtown, to build it back up. You can't build a church like that anymore." 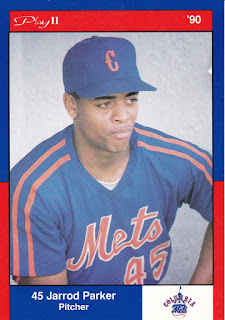