Scott Taylor was Winston-Salem's best catcher in 1990; He briefly made AAA, but not the bigs

Winston-Salem superfan Mildred Reich, 86, who had hardly missed a game in 35 years, didn't get friendly with players, she told The Greensboro News and Record in July 1990.

But she did send a card to Winston-Salem catcher Scott Taylor, she admitted to The News and Record, after he'd  broken his ankle in a brawl the previous week.

"That was awful," Reich told The News and Record, after just giving her candid thoughts on umpires in general. "He was our best catcher, and the umpires simply let that situation get out of hand if you want to know what I think about it."

That year marked Taylor's fourth season as a pro. He went on to play in two more. He briefly made AAA, but he never made the majors.

Taylor's career began in 1987, taken by the Cubs in the 19th round of the draft out of Waukegan East High School in Illinois.

At Waukegan, Taylor as a sophomore was part of a young team in 1985 that made it to the sectional title game. His coach, Jack Mallory, spoke of Taylor and the rest of the team to The Chicago Tribune.

"We've got three sophomores and one junior that play all the time," Mallory told The Tribune. "So much depends on how they develop from game to game. They`re learning all the time."

Taylor learned enough to turn pro after his senior season. He started with the Cubs at rookie Wytheville. He hit .234 over 32 games.

He played 1988 between single-A Charleston and short-season Geneva. He hit .240 between them. He went 6 for 7 over two games in August with Geneva.

Taylor played 1989 between Charleston and single-A Peoria, then 1990 at high-A Winston-Salem. He hit .276 over 63 games at Winston-Salem. 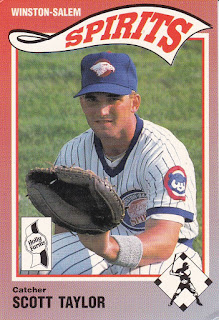