Kevin Roberson had a good spring for the Mets in 1996 and the Mets looked forward to what the ex-Cubs outfielder could do in the regular season, according to The New York Times.

His spring included seven hits, four of them home runs, The Times wrote.

"Maybe we've caught lightning in a bottle," Mets hitting coach Tom McCraw told The Times. "I knew he was strong, but he has shown consistent power in his hits."

After parts of three seasons spent with the Cubs, Roberson joined the Mets for 1996. In the regular season that year, Roberson saw 27 games, the final games of his big league career.

Roberson's career began in 1988, taken by the Cubs in the 16th round of the draft out of Parkland College in Illinois.

Roberson started with the Cubs at rookie Wytheville. He hit .209 over 63 games, with three home runs.

Over 62 games with the Cubs in 1993, Roberson hit .189, but knocked nine home runs. He hit one of his home runs in August, a ninth-inning game-winning shot off future hall of famer Lee Smith, according to The Chicago Tribune.

"I was just trying to get a base hit," Roberson, told The Tribune afterward. "It's definitely a good feeling."

Roberson continued, however, to play in the minors. He played 1997 with the Giants at AAA Phoenix, then 1998 with the White Sox at AAA Calgary. He then spent time with the Twins at AAA Salt Lake in 2000.

Roberson then played in Mexico and returned stateside for three final seasons in the independent Northern League. He last played for independent Joliet in 2004. 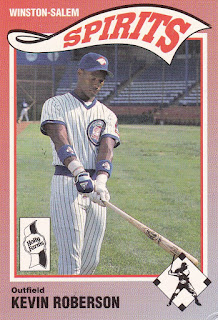