Originally published April 19, 2018
Ryan Richmond caught the eye of scouts in high school while playing baseball. But he also played another sport at Bradley-Bourbonnais High - basketball.

He scored 15 points in a February 1986 Bradley-Bourbonnais loss and another 16 in a March 1987 regional win, according to newspaper accounts.

Richmond turned pro in his first sport as a pitcher directly out of Bradley-Bourbonnais. His pro baseball career lasted four seasons. He never made AA.

Richmond's baseball career began in 1987 as a 34th round selection by the Mets out of Bradley-Bourbonnais in Illinois. He was the school's fourth student ever to be selected in the draft.

Richmond then pitched in eight final games in 1991 for single-A Charleston in the Padres system. He gave up 9 earned in 9.2 innings of work to end his career. 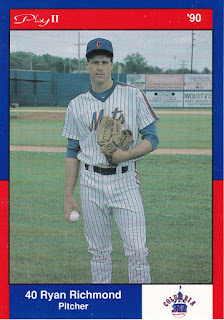