Jeff Barry came through for the Rockies in a 1999 game; Played in three major league seasons, Japan

Rockies manager Jim Leyland put outfielder Jeff Barry in the lineup in this September 1999 game and Barry didn't let him down, according to The Associated Press.

Barry did so with a 10th-inning, bases-clearing double that gave Colorado at 5-2 win, The AP wrote.

"I get a gut feeling every once in a while," Leyland told The AP afterward. "He's swinging the bat well and I thought this was a decent matchup. He had a big night."

Barry had that night nearly a decade into his professional career and in the midst of his third and best season in the majors.

By the time he was done, Barry played professionally in 13 total campaigns, including those three that hit the majors and one in Japan.

Barry's career began in 1990, taken by the Expos in the fourth round of the draft out of San Diego State University. He played his high school ball at South High in Medford, Ore.

Barry made AA Binghamton in 1994, then saw Binghamton, AAA Norfolk and Flushing in 1995.

Barry debuted with the Mets in June 1995.  He got into 15 major league games that year and picked u two hits in 15 at bats.

His 1998 time came after the Rockies' Larry Walker went down with injury. In his first game, he nearly hit a grand slam and made some difficult plays in the outfield, according to The Denver Post.

"I don't expect to be (in the lineup), but I'd like to be," Barry told The Post then. "The more at-bats I get, the happier I am. I understand that more than likely, I'll only be here a couple weeks. But I can't think like that." 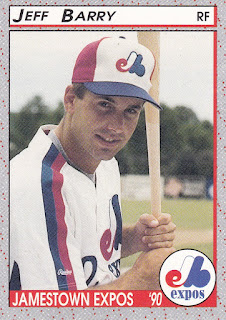