"We've got a lot of injuries," Boyce told The News in August 1988. "We lost Kerry Shaw yesterday, who I think is one of the better hitters in the league, if not the best."

Shaw ultimately got into 54 games that year for independent Salt Lake, but hit .353. Shaw also earned a contract with the Giants. Shaw, though, couldn't turn his success there into a successful career in affiliated ball. He played in just four pro seasons, never making it above high-A.

Shaw's professional career began that year in 1988, signed by independent Salt Lake out of college.

With Salt Lake, Shaw also scored 54 runs in his 54 games. Before his own injury, Shaw helped make up for another one, getting three hits in a Trappers win, The News wrote.

"I'm just seeing the ball good. It just happens," Shaw explained to The News of his night, then referencing an injury to a teammate. "You have to live with it."

He then moved to independent Salinas, of the California League. There, he hit .241 in 128 games. He also scored 54 runs that year, though in more than twice the number of games.

Shaw returned to Salt Lake City for 1991, getting into 23 final games, hitting .301. In one August game, he picked up three singles.

Shaw didn't return to the Trappers until July, when he came back for an Old-Timers' game. The Giants didn't keep him and he couldn't find a spot elsewhere, The News wrote. He ended up re-signing with the team. It was his last run at the pros. 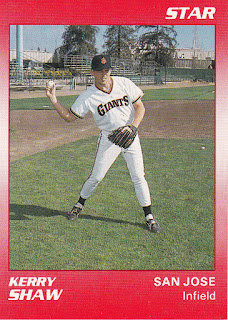