Greg Maddux drew early comparisons to all-timers, then became one himself 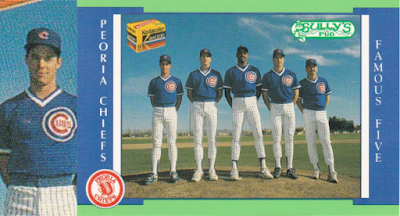 Cubs manager Don Zimmer reached back to his own playing days when describing his young hurler Greg Maddux in 1988 to The Los Angeles Times.

Zimmer spoke in Maddux' third major league season and his first with a winning record, then 13-3.

"I can remember watching a young Don Drysdale, and this kid's the same way," Zimmer told The Times. "Nothing fazes him. Half the time you don't even know he's here. I mean, it's really fun to see a kid like this go from one year to another."

For Maddux, of course, the comparison proved a good one, if not even understated. Drysdale pitched over 14 seasons, won 209 games and made the Hall of Fame. Maddux went on to pitch over 23 seasons, win 355 and be called one of the best pitchers ever.

Maddux' career began in 1984, taken by the Cubs in the second round of the draft out of Valley High School in Las Vegas.

He started with the Cubs that year at rookie Pikeville. He made single-A Peoria in 1985, where he went 13-9 and did enough then and afterward for the club to remember him in their team set five years later.

Maddux made AAA Iowa in 1986, then debuted in Chicago that Sept. 3 in the in the 18th inning of a game that had been suspended the day before. He gave up a home run and took the loss.

His first start came four days later and he fared better. He threw a complete game for a 11-3 win against the Reds while scattering 11 hits.

"The kid is an excellent pitcher," the Reds' Dave Parker told UPI of Maddux after "the kid's" first big league win.

Maddux pitched for the Cubs through 1992. He then signed with the Braves and helped them on a run of division titles and the 1995 World Series championship.

Then there's the matter of the Cy Young. He won four-consecutive National League Cy Young awards from 1992 to 1995.

"I'll never get tired of winning this award," Maddux told The Hartford Courant after winning his fourth Cy Young in 1995. "What makes this one special is that it came in the year we won the World Series. I'm more excited about what our team accomplished than what I've done individually."

On the occasion of his 200th major league win, an 8-4 victory over the Giants, the Giants' J.T. Snow told reporters why Maddux won that game and his other 199.

"Maddux hit the corners," Snow told reporters afterward. "His ball seems like it's there, and you swing at it and it's not. That's why he's so good."

Maddux stayed with the Braves through 2003, then continued pitching through 2008. In 2014, he was elected to the Hall of Fame with 97 percent of the vote.

In his Hall of Fame speech, Maddux told those gathered he wouldn't be there if it hadn't been for the many positive people in his life, including three minor league coaches, Rick Kranitz, Jim Wright and Dick Pole.