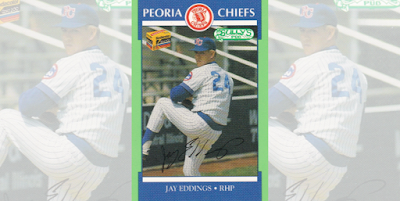 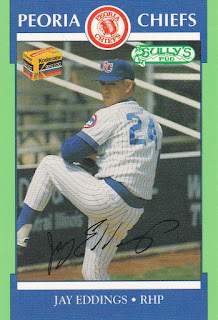 Coming off a senior season at Sperry High in Oklahoma where he struck out 155 batters, helped his team win a state title and won The Oklahoman's Prep Baseball Player of the Year award, Jay Eddings spoke with the paper about his plans going forward.

He'd wanted to play professionally since he started learning the game at age 7, but he also expected to go to college, he told the paper.

"A couple of pro teams have contacted me and wanted to know what it would take to sign me, but I don't think they will offer me that much," Eddings told The Oklahoman. "I just plan to go to college and wait until after my junior year. That's when I'd like to sign."

Eddings did go to college and, four years later, he did turn pro. His pro career lasted four seasons. He never made AA.

Eddings, however, has stayed in the game, as a scout, finding players to sign and then figuring out himself what it would take for them to sign.

Eddings' pro career began in 1987, signed by the Cubs as a undrafted free agent out of the University of Oklahoma.

He spent 1989 largely at single-A Peoria. He gave up a single and walked the bases loaded in an August game at Waterloo, but then got the final out. In 38 outings overall with Peoria that year, he turned in a 1.20 ERA and saved 11.

Eddings played 1990 between Peoria and high-A Winston-Salem. He went 2-6 on the year, with a 4.19 ERA. He picked up his 11th of 12 saves at Winston-Salem in an August game where he retired the final two batters in a 4-0 win with runners on second and third. That season marked his final as a pro.

In 1993, Eddings was in summer collegiate ball, managing the Nevada Griffons.

By 2000, he was a scout for the Rangers. He continued in that role in 2014, when he spoke  to The Fort Worth Star-Telegram about how he approached his job.

"The first thing you do when you walk into a stadium is ask yourself, ‘Does this player pass the eye test?'" Eddings told The Star-Telegram. "Do they fit in? Do they look athletic? Are they strong and developed? If you see a guy who is overweight, you might have some questions about his work ethic. But it comes down to tools and makeup."
1990 Minor League Tally
Players/Coaches Featured:3,205
Made the Majors:1,160-36.2%
Never Made Majors:2,045-63.8%-X
5+ Seasons in the Majors: 481
10+ Seasons in the Minors:283
Posted by Steve78 at 11:34 PM