Mark Huismann had car troubles in 1983 - on his way to his big league debut; Saw nine big league campaigns 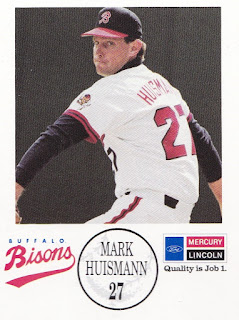 Called-up from AAA Omaha for the first time, Mark Huismann hopped in his parents' car, and, after stopping three times as the car overheated, Huismann finally made it to Kansas City in August 1983, just in time for that night's game, The Associated Press wrote.

Huismann not only got in the game that night, according The AP account, he helped preserve an early Royals one-run lead. He also got the win.

"I just said 'Welcome to the big leagues,'" Royals manager Dick Howser told reporters. "I was impressed with him. He has a good live arm. He went right after them and challenged them. I liked that. It's a nice way to break in."

Huismann had been signed by the Royals three years earlier, as a free agent. He'd made AA in 1982 and made a brief stop at AAA Omaha in 1983 before being called up to Kansas City.

In 1985 he saw his major league playing time reduced, to only eight late-season appearances. He didn't make the post-season roster, but he also posted 34 saves at AAA Omaha, then a league record.

The Royals wanted to cut his salary by 20 percent. Huismann responded by saying he'd rather be traded. ''I don't think there's any reason I should have to take a pay cut after the year I had,'' Huismann told reporters.

He soon got his wish. In May, the Royals shipped Huismann to the Mariners. In Seattle, Huismann got into 36 games, with a 3.71 ERA and getting four saves.

Huismann went on to play for a different team each year through 1989, Cleveland, Detroit and then Baltimore, seeing the majors each year. Landing with the Pirates for 1990, Huismann was referred to by one account as a retread.

Huismann got back to the majors for only two games that year, in June. Pirates manager Jim Leyland sent him back down that month, saying Huismann needed some work to get back to form.

"Huismann needs to get his breaking pitch back," Leyland told The Pittsburgh Post-Gazette. "It's tough to be a one-pitch pitcher against the clubs we face."

Huismann pitched in five more games for the Pirates in 1991 and his major league career was done. But he would return four years later, in spring 1995 for a shot at replacement ball.

He had been in a management training program when the Royals called him to play that spring, according to an AP story. The strike ended and Huismann wasn't sure what he would do next. But it wouldn't be baseball.